Home World Dürer drawing bought for $30 at yard sale worth more than $10M,... 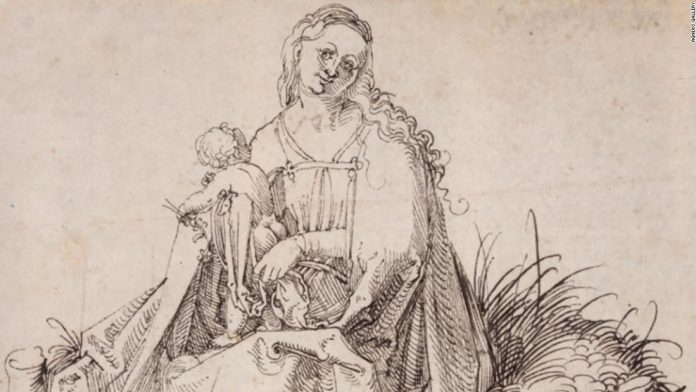 A 16th century drawing by one of the key figures of the German Renaissance has been valued in excess of $10 million after it was initially purchased at a yard sale for just $30 in 2017.

According to Agnews Gallery — the London auction house in possession of the artwork — Albrecht Dürer, who died in 1528, is regarded as both the greatest German artist of his time and as one of the most important artists and intellectuals of the European Renaissance.

The drawing that has been rediscovered is titled “The Virgin and Child.” As Dürer’s career and legacy has been studied in depth since his death, it is extremely rare to find unknown works of his and Agnews said in a press release that this drawing has been “the subject of significant interest since its rediscovery.”

Boston-based art collector Clifford Schorer, who is a consultant to the gallery, told CNN Thursday that he came across the rare artwork, thought to have been completed in 1503, by chance on the way to a party in Massachusetts in 2019.

He had forgotten to bring a gift to the party and so took a detour to a bookstore, which sold collectable volumes, en route.

The bookseller told him his friend had a Dürer drawing and asked if he would take a look at it. Schorer agreed, but held out little hope, given that the last time an unknown drawing of “caliber” by the artist was discovered was more than 100 years ago, he said.

Dürer had a significant body of work. “Young Hare,” completed in 1502 and pictured here, is widely regarded to be one of the artist’s most celebrated works because it is indicative of his observational style. Credit: Giorgio Morara/Alamy Stock Photo

The artwork had been purchased at a yard sale at the home of an architect who had been gifted the piece from his art dealer father, Schorer said.

“Generally speaking it’s an inverse relationship between how dramatic the claim is and how much of a let down it is. “[For example] if someone tells me they have a Leonardo [da Vinci], I’m usually pretty confident I’m going to see some images that are unimpressive,” Schorer said.

But when he arrived to examine the artwork weeks later, he was taken aback by its quality.

Schorer said he told the owner, who wishes to remain anonymous: “I think it’s either the greatest forgery I’ve ever seen or a masterpiece.”

“It was like [experiencing] a kind of electricity. When you’re in my world you spend your life looking for unknown things that lead to fascinating research avenues… and I could see I was at the beginning of something extremely exciting,” Schorer said.

Schorer described how he then began a three-year journey to verify the artwork, which involved taking 17 international flights around the world to consult experts.

This included a roundtable at the British Museum in London in December last year, where the drawing was examined by scholars in the field alongside other works on paper by Dürer, according to Schorer and Agnews.

The artwork has undergone technical age analysis and bears the hallmark of the artist, Schorer said. He believes it is worth “eight figures” and in excess of $10 million.

“It’s probably fair to say he’s one of the greatest graphic designers that ever lived — a pioneer in engraving and drawing. He was a maestro in black and white, and his famous prints … inspired artists all over the world.”

“In terms of relative value, I think you have to compare it to other old master drawings,” Schorer said, such as the Dutch artist Lucas van Leyden, whose drawing sold for $15.6 million in 2018.

The Power of DIY: This CNN Hero helps women build new lives by training them for construction careers