Home Sport Conte’s stunning admission on future: ‘Club will have to assess me’ 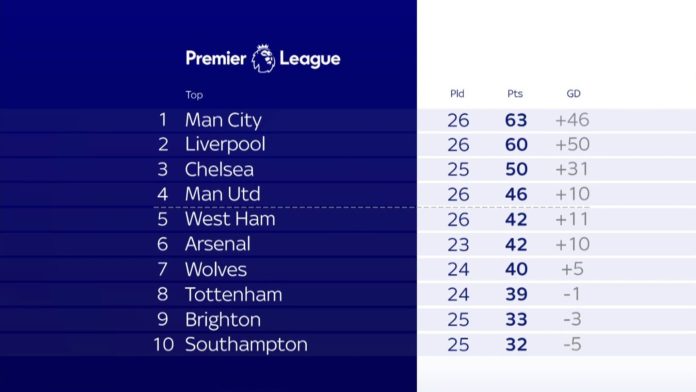 Antonio Conte said Tottenham will have to make “an assessment” on his position at the club in a stunning interview after a run of four defeats in five Premier League games.

Conte’s side were beaten 1-0 at Burnley on Wednesday in the Premier League, meaning they remain seven points off the top four.

After the match the Italian said: “It was a difficult night. It’s not only tonight, in the last five games we lost four games. It means there will be [an] assessment about the club, about me, because I think for me it is very frustrating to lose four out of five.

“For sure the situation speaks clear. I am really sorry for the fans, I am really sorry because I think they don’t deserve this. But when you lose four out of five it means the club have to make an assessment, also to speak together, and to understand which is the best solution.

FREE TO WATCH: Highlights from Burnley’s win against Tottenham in the Premier League.

“In the last five games we’ve lost four. This is reality. Not the performance. We lost four of the last five, nobody deserves this situation, this is the reality.

“I came in to try to improve the situation but maybe in this moment, I don’t know. I’m not so good to improve it. It is very frustrating. Working hard, working a lot and trying to get out the best of players. Too honest to close my eyes.”

‘I am not helping the club’

Though Spurs are still only three points from fifth place with games in hand on a number of sides around them, Conte said their form was closer to that of a side battling relegation.

Conte said: “On Saturday we play another game [Leeds at Elland Road], it’s the moment to see the situation and make an assessment, really frustrated, not used to seeing these situations. I’m trying to do everything but the situation is not changing.

“In the last five games, we are playing like we are in relegation, this is the reality, maybe there is something wrong. I want to take responsibility, if I have that, I’m open for every decision, I want to help Tottenham from the first day I arrived. Also to take my salary. It is not right at this moment.

“In this moment it is not important to speak about mistakes or other situations. The reality is we lost four out of the last five. With this situation, we would have to fight for the relegation zone if we continue this way.

“I repeat, it would be important for everybody to understand the situation, because for sure you have to make assessment of the club first of all, and I repeat I am available to the club for every decision.

“I repeat, I come here to help the club, but in this moment it is very difficult, because I am not helping the club, and for me it’s a very, very frustrating situation.”

‘I am doing a lot, but it is not enough’

The defeat at Turf Moor came just four days after the high of Saturday’s 3-2 win away to Premier League leaders Manchester City.

Asked why his messages are not getting through, the 52-year-old replied: “We are working very hard, every day, and for this reason it is very frustrating, the situation.

“When you work hard and you see in the last five games you lose four games, the situation makes me frustrated a lot.
For the work that we are doing, I don’t deserve and we don’t’ deserve this, but it’s the reality.

“I am sorry because I repeat, I don’t like this situation. We are trying to change, but the reality is in the last five games we have lost four times.

“Maybe the people have to make an assessment, and I am available for every decision for the club, and to help the club.

“I am doing a lot for the club every day, but it is not enough. For this reason, I think now is the right moment to make an evaluation for the club.”

Questioned about his personal situation at Spurs, he said: “For sure, I have to speak with the club.

“It is not normal for Tottenham to lose four out of five. It is not normal, and for sure it is right to speak, to have a conversation with the club and to find the best solution.

“At the moment, the situation is not good.”