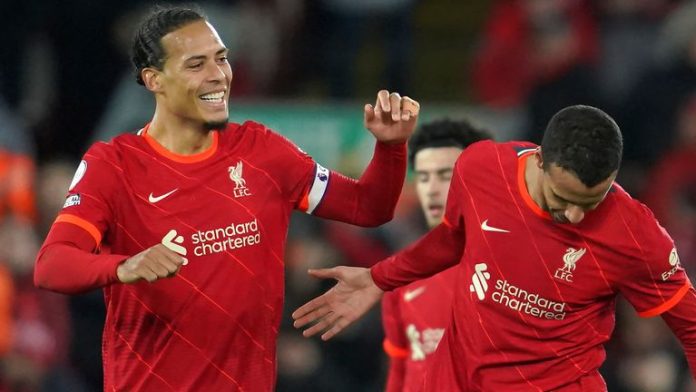 Liverpool moved to within three points of Premier League leaders Manchester City with a rip-roaring 6-0 win over Leeds at Anfield.

Mohamed Salah converted two penalties and assisted Joel Matip before the break against a shell-shocked Leeds and the hosts maintained dominance after the interval with Sadio Mane netting a double and Virgil van Dijk heading home a sixth in stoppage time.

A fixture that promised goals duly delivered as Jurgen Klopp’s side exploited the visitors’ customary open approach against the top teams, with the first half played at a frenetic pace.

Man of the match: Mohamed Salah

With 15 minutes on the clock, Fabinho nicked the ball in midfield and found Luis Diaz, who fed Andy Robertson down the left flank. His powerful cross was clearly blocked by Stuart Dallas with his hand and referee Michael Oliver pointed directly to the spot, with Salah sending Illan Meslier the wrong way.

Just 15 minutes later, Matip gathered the ball and had ample time close to the halfway line, look up and find Salah down the right flank, who then threaded an inch-perfect return pass for Matip – who had continued his run into the box – to smash past Meslier.

Joel Matip netted Liverpool’s second goal against Leeds finishing a move the defender started in his own half.

Liverpool ramped up the pressure as the half progressed, with Salah threading another pinpoint pass for the onrushing Mane, who looked to round Meslier before being upended by Luke Ayling’s trailing leg to concede another penalty, which Salah converted with aplomb, again.

Klopp’s side continued to rattle Leeds, cutting through midfield with ease and inventive combinations to find pathways into the box. It should have been four before the break, with Trent Alexander-Arnold whipping a free-kick behind the defensive line and Matip’s touch finding Fabinho, who blazed wide.

Liverpool remained dominant after the break, but the pace of the game slowed as Leeds appeared to assert a degree of damage control, with Salah missing a second opportunity to seal his hat-trick, spurning his effort over the bar after being found by Curtis Jones.

Mane scored his first goal 10 minutes from time. Jordan Henderson won a loose ball from a poor Meslier clearance before feeding Salah, who produced a stunning reverse, return pass for the England midfielder to then sweep a searching ball across the box for Mane to fire home.

Substitute Divock Origi created the fifth goal, breaking down the left flank and colliding with Meslier, with the ball spinning into the path of Mane to double his haul.

The sixth and final blow for Leeds came in stoppage time with Virgil van Dijk heading home unopposed from a Robertson corner.

Man of the match – Mohamed Salah

The Egyptian could have had a hat-trick before the break but still registered three goal involvements, converting two penalties and assisting Matip, having also executed the incisive pass for Mane which led to the second spot-kick.

“In the end, it went pretty smoothly. It was really hard work, because they make it hard work. We had to find a bit during the game and calm our possession. It’s really tricky – if you play against a man-marking side, you tend to feel pressure when there is none. The game becomes hectic, and Leeds are really good when the game is hectic.

“There might be some people out there that think penalties should not count [for players]. To be honest, when you have a penalty, you want the right person on the spot to put it away – that’s what Mo did. On top of that, he played a really, really good game. Sadio’s game was one of his best, the way he interpreted the role – playing in the centre – and how he got away from opponents and opened gaps.”

Jurgen Klopp says despite winning 6-0 against Leeds, it was a hectic game at Anfield.

Bielsa: We are fighting relegation

“The distances between the two teams – we were never able to reduce them. Of course, we thought it would be difficult to play an even-keel game, but we wanted to prevent what ended up happening. A result like today, you can’t explain it with the absences. We are fighting relegation and, of course, it worries it me.”

Marcelo Bielsa says there was too much of a distance between his Leeds side and Liverpool following their 6-0 loss at Anfield.