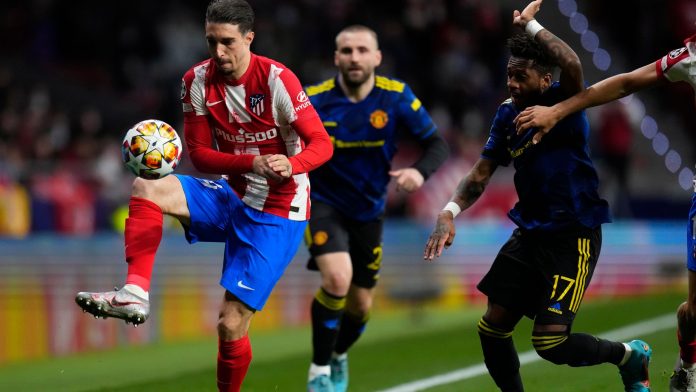 Anthony Elanga had only been on the pitch for a few minutes when he raced onto Bruno Fernandes’s through-ball and slotted home Manchester United’s equaliser.

With that swing of the teenager’s right foot, a poor night became a positive one for United, at least in terms of the result. The 1-1 draw makes them favourites to advance to the quarter-finals.

For Elanga, it was a second goal in as many games following his late strike in Sunday’s 4-2 win over Leeds. For United, it was also a first shot on target after 80 minutes of toil in the Spanish capital.

They return to Manchester with renewed hope of claiming a place in the last eight in next month’s second leg. If they succeed in doing so, there will be little care for how they performed in Madrid.

But still this was a display to cause some alarm.

United were listless for long periods, dominating the ball but doing little with it, and while much had been made of Atletico’s recent defensive struggles in the build-up to the game, it was the visitors who looked vulnerable on the night.

Joao Felix’s opener arrived after only seven minutes as he rose unmarked between United’s centre-backs to head home Renan Lodi’s teasing cross. But there were warning signs even before that.

Harry Maguire could be seen needlessly giving away a corner less than two minutes in. Victor Lindelof was required to make a last-ditch block to deny Jose Maria Gimenez. David de Gea sent a panicked clearance straight into the stands.

Defensive instability has been a theme of United’s season and it has continued under Ralf Rangnick. They have only kept three clean sheets in his 13 games in charge in all competitions.

Most of their problems stemmed from their right side on this occasion, where Lindelof was surprisingly selected at full-back. But even Raphael Varane, a four-time Champions League winner with Real Madrid, looked rattled when put under pressure.

United were fortunate not to have fallen further behind at half-time, with Sime Vrsaljko’s bundled effort bouncing off the crossbar shortly before the break, but their performance was even worse from an attacking perspective.

While Atletico had a clear plan, to tear into United from the outset in hope of scoring an early goal, then keep their shape and await opportunities on the break, United appeared to lack one – or at least, lack the desire to follow one.

They had 67 per cent of the possession in the first half and yet failed to record a shot on target or, even more damningly, register a single touch in their opponent’s penalty box.

“It could only get better because I still cannot believe what we did in the first half,” said Rangnick afterwards.

“We played without conviction, without all the necessary aggression against the ball and that’s why we were really struggling.

“In the second half, we did better. We had more possession in areas that mattered and, had we played another 10 minutes, we might have even one the game.

“We just played the ball in our own half, without any deep runs, without any verticality, and then it’s difficult against a team like Atletico when you have conceded an early goal.”

The second half began as the first one ended, with Fred directing a routine pass out of play as he attempted to find Lindelof. Soon after that, Fernandes miscontrolled a Pogba diagonal on a rare foray into the Atletico box, allowing Stefan Savic to snuff out the chance.

The Portuguese international was enduring a wretched night at that point having lost possession more times than anyone else on the pitch, his struggles summing up United’s lack of imagination on the ball as Atletico kept them at arm’s length.

Eventually, though, one moment of brilliance made the difference.

His through-ball for the equaliser was perfectly weighted, with Atletico defender Reinaldo unable to cut it out. The pass, like Elanga’s finish, was a reminder of the quality in United’s ranks.

It was not the first time an individual moment of inspiration has saved United this season but Rangnick’s frustration at their performance prior to that shows he is striving for something more.

For now, the German’s efforts to turn this group of players into an effective unit are still a work-in-progress. United remain a maddening mixture. Disjointed but deadly; complacent but clinical. And while a Champions League quarter-final place may be within reach, another muddled performance shows an identity is still lacking.