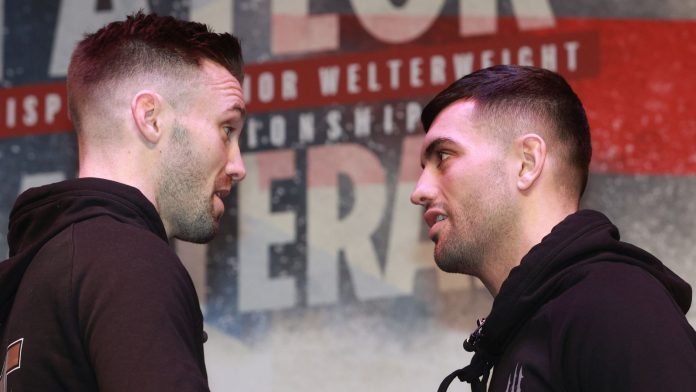 Josh Taylor and Jack Catterall’s rivalry ramped up when they engaged in a spiteful face-off before their undisputed title fight.

Taylor defends every major super-lightweight belt against Catterall in his homecoming fight in Scotland on Saturday night, live on Sky Sports.

“It was mind games,” Catterall said after the face-off. “I don’t pay attention.

“Of course I’m not going to run from him. I’m prepared to go to any place possible to get the win.

“I’ll meet him in the middle. No bother.”

Catterall’s trainer Jamie Moore said about Taylor’s attempt to crank up the animosity: “He has tried to get a bite out of him. But it isn’t going to happen.

“It won’t have a bearing on the fight.”

Jack Catterall said that he’s not paying any attention to Josh Taylor’s mind games and is feeling relax ahead of their clash.

Taylor reflected on the face-off: “How is he going to win? I don’t think he will meet me in the centre. I think he will try to walk me onto a shot.

“If he’s on the front foot, that plays into my hands.

“I’ve studied him diligently. He is a good defensive fighter, quite slick, he can punch hard, he is a clever fighter.

Josh Taylor will defend his undisputed super-lightweight title against fellow unbeaten fighter Jack Catterall and claims that ‘there’s no beating him’.

The rivals for the undisputed championship earlier argued at a press conference.

“He’s here to take away what I’ve worked hard for,” Taylor said.

“I cleaned out the division but he’s getting a shot at the jackpot.”

Taylor’s trainer Ben Davison said about his attributes: “The size of him, he’s so fast and sharp, he’s tough as nails with a Rolls-Royce engine. He is the full package.

“Josh is exceptional in every area and is a very, very hard man to beat. He is unbeatable at 140lbs.”

Josh Taylor will defend his titles against Jack Catterall in Scotland on Saturday, live on Sky Sports Action from 7pm and from 8pm on Sky Sports Main Event.