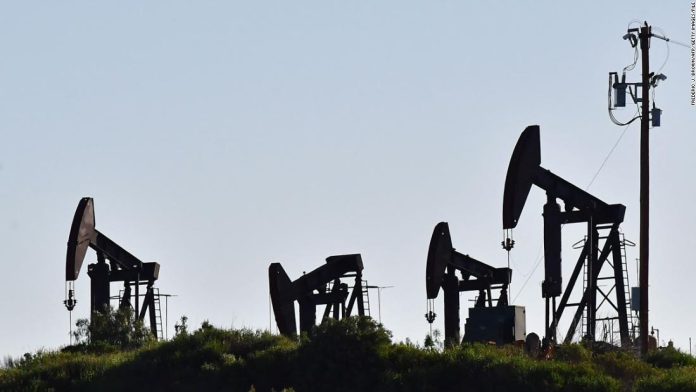 Brent crude, the global benchmark, added 8.5% to trade at $105.40 per barrel by 5:30 a.m. ET on Thursday. Brent last traded above $100 per barrel in 2014. US oil prices increased 8% to over $100 per barrel.
A broad offensive by Russian forces targeted military infrastructure across Ukraine as well as several airports early Thursday. The assault began hours before dawn and quickly spread across central and eastern Ukraine as Russian forces attacked from three sides.
Russia is the world’s No. 2 oil producer and a major exporter of natural gas. Supply disruptions could drive retail prices higher, making it more expensive for people around the world to fuel their cars and for Europeans to heat their homes. Gasoline prices are already at record levels in parts of Europe.
Global oil supplies were already very tight.
Crude oil for near-term delivery is commanding a record premium over longer dated contracts, according to analysts at UBS, as investors react to dwindling inventories and increased demand. Some refineries are avoiding buying Russian oil due to sanctions fears, they added.
Prices have marched steadily higher for nearly a year, driven by resurgent demand following the easing of pandemic lockdown measures. The Organization of the Petroleum Exporting Countries (OPEC) and 10 other major crude oil producers, including Russia, have been gradually raising output but have struggled to meet their own production targets despite huge pressure from major energy consuming nations to pump more.
The Ukraine crisis adds another dimension to the OPEC+ coalition’s fraught politics. The Russian economy is heavily dependent on revenue from oil and gas, and Moscow wants prices to remain elevated. Saudi Arabia — a major US ally — will now come under intense pressure from developed economies to increase output.
A tight market and armed conflict in Europe is a potent combination. Oil prices could settle as high as $140 per barrel in a worst case scenario where energy flows are disrupted, according to analysts at Capital Economics.
The International Energy Agency warned earlier this week that military action could put at risk 250,000 barrels per day of Russian oil exports transiting Ukraine via pipeline to supply Hungary, Slovakia and the Czech Republic. However, those countries have ample emergency stocks.
There are limited sources of additional supply. Rising prices will encourage US shale producers to increase output. A nuclear agreement between Iran and the West that eases sanctions on the OPEC member could also bring more barrels onto the market.
“An Iranian nuclear deal that removes sanctions and raises production remains a wild card, but the market will increasingly need additional oil,” said analysts at S&P Global Platts Analytics.

Sunset Rubdown to Reunite After 13 Years