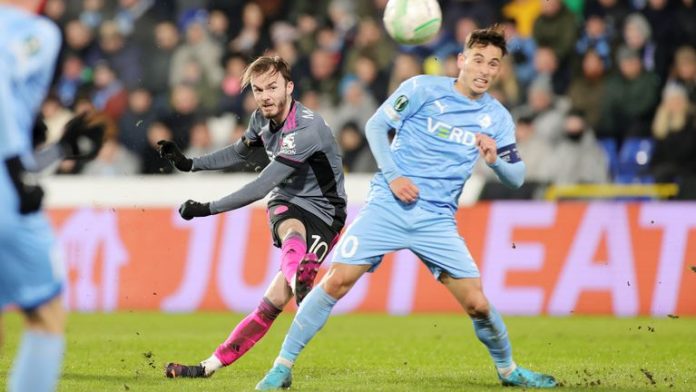 Leicester eased into the last-16 of the Europa Conference League 7-2 on aggregate after a 3-1 second-leg win away at Randers.

Leading 4-1 from the first leg, Harvey Barnes ensured there would be no upset in the Danish snow when he slotted Leicester into a second-minute lead, but instead of kicking on, the Foxes made hard work of securing a morale-boosting win.

Randers passed up a host of gilt-edged chances while Kasper Schmeichel produced two stunning saves before Leicester’s quality finally came to the fore.

James Maddison whipped a superb free-kick into the top corner (70), before picking out the other corner moments later with a fine 20-yard drive (74), and there were smiles all around the Randers Stadion when Stephen Odey grabbed a late consolation for the hosts after a horrific bobble bewildered Schmeichel.

Leicester await their fate in Friday’s last-16 draw, where Roma, Feyenoord and Rennes are among the sides they could draw.

Man of the Match: James Maddison.

Leicester ease past Randers into last-16

Randers were always second favourites to advance after their heavy defeat at the King Power Stadium last week and their task was made insurmountable just two minutes into the second leg when Barnes raced away down the left and curled home into the far corner.

Despite the early setback, Randers went on to create the better chances in the first period, but Vito Hammershøj Mistrati squandered their best opening, stabbing a shot wide of goal.

On the stroke of half-time, Maddison casually lost possession deep into Leicester territory and a lofted pass over the top fell for centre-back Simon Piesinger, who lashed a volley inches over the bar.

Odey was denied by a clawing Schmeichel save and a goal-line clearance from Wilfred Ndidi early in the second half, Maddison and former Manchester United starlet Tosin Kehinde exchanged attempts on goal, before Leicester finally sprinkled some stardust on events.

Maddison twice curled home from outside the box, the first a 25-year free-kick, before wrapping an equally unstoppable effort from free play into the opposite corner four minutes later to put some gloss on Leicester’s seamless progression.

Randers were then gifted a consolation when Odey capitalised on a rare mistake from Schmeichel, who was undone by a bobble on the pitch when dealing with Jannik Vestergaard’s backpass, six minutes from time.

At first glance, it looked like a job well done for Leicester. In many respects it was. A 7-2 aggregate victory over Danish side Randers and a place in the last 16 of the Europa Conference League secured for Brendan Rodgers’ side, without needing to get out of second gear.

But given the quality of the opponent placed in front of them, and the fact they travelled to Denmark with a 4-1 first-leg advantage and all but certain of progressing from their play-off tie, Leicester’s performance left you wanting more.

Yes, Harvey Barnes’ early strike ended Randers’ hopes before they even had the chance to get off the ground, and, yes, James Maddison scored two of the finest goals you’re likely to see from the same player in a single game, but with Leicester in the midst of the worst period since Rodgers took charge, the opportunity to emphatically turn a corner was passed up.

With the Foxes yet to keep a clean sheet in 2022, the trip to Randers would have been earmarked as a prime opportunity to get their shaking defence headed in the right direction, but even that escaped them.

Randers were awarded chance after chance after chance, and just when Leicester looked to have escaped with that elusive clean sheet, the gods of the playing surface transpired and a nightmare bobble-induced mistake from Kasper Schmeichel gifted Randers a chance they simply couldn’t miss.

With a greater calibre of opposition awaiting Leicester in Friday’s last-16 draw, and in the remainder of the Premier League season, the Foxes remain far from their best and with time steadily running out for them to turn things around.

What’s next for Leicester?

Leicester travel to Burnley in the Premier League on March 1; kick-off 7.45pm.