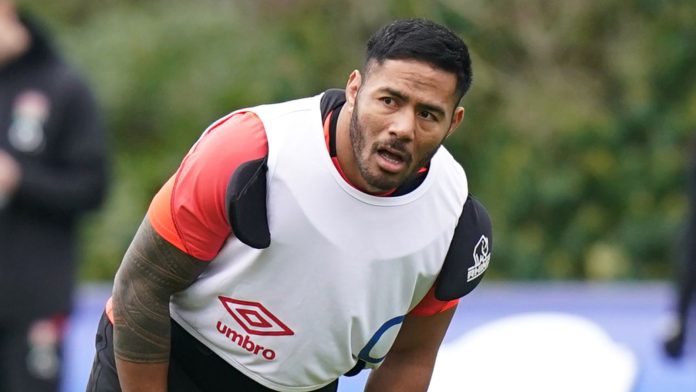 Manu Tuilagi was named in England XV for match against Wales at Twickenham and set for first Six Nations appearance since March 2020 but was then withdrawn after suffering another hamstring tear; England hopeful that centre could recover before end of tournament; Joe Marchant recalled

Manu Tuilagi’s England comeback has been delayed, with a hamstring injury ruling the centre out of Saturday’s Six Nations clash with Wales.

The 30-year-old was named in the England XV and set for his first Six Nations appearance since March 2020, only for a scan on Thursday afternoon to show a “low grade” hamstring problem.

Fellow centre Joe Marchant has been recalled and will train with the squad on Friday, with England to confirm their team ahead of the game on Saturday.

Tuilagi – who was poised to partner Henry Slade in the midfield at Twickenham – has injured the same hamstring he tore scoring a try against South Africa in November.

However, it is understood that England are hopeful Tuilagi could recover before the end of the Six Nations, with Eddie Jones’ side facing further fixtures against Ireland at Twickenham on March 12 and France in Paris on March 19.

The Sale centre’s England career has been chequered by injury, with the Samoa-born player missing 79 possible matches since debuting in 2011, including 50 of the 71 played since Jones took charge in 2015.

Speaking earlier on Thursday, before Tuilagi’s latest injury was revealed, Jones said: “Manu gives us a different way to attack in the backs. He’s a gain line accumulator.

“He wins the gain line consistently and draws defenders in, which creates space for other options. He does that better than anyone else in the world when he’s at full tilt. We’re planning for him to be at full tilt on Saturday.”

Courtney Lawes had also been named in England’s side to face Wales after coming through concussion protocols and will captain the team when he takes his place in the back row alongside Tom Curry and Alex Dombrandt.

Curry captained England for their 20-17 defeat against Scotland and 33-0 victory over Italy with Lawes missing.

“Courtney is a great ball-carrier and destructive defender,” said Jones.

“He has good skills around the players. When he speaks they listen, he leads by example.

“We’re really pleased with the job Tom Curry did. He did an outstanding job as a young captain and he’s going to be an outstanding leadership prospect in the future.”

Before Tuilagi’s injury, it was also revealed that Harry Randall will retain the No 9 jersey, meaning fellow scrum half Ben Youngs will have to come off the bench if he is to become England’s most-capped player of all time.

An appearance for Youngs would see him top the 114 caps achieved by Jason Leonard.

Rees-Zammit misses out for Wales

Louis Rees-Zammit has missed out on selection for the Test at Twickenham Stadium, with Alex Cuthbert and Josh Adams being preferred out wide by Wayne Pivac.

Cuthbert will earn his 50th Test cap on Saturday afternoon with Adams returning from injury. Pivac described it as “unfortunate” that Rees-Zammit had to miss out.

“We’ve looked at the opposition we’re playing and niggly injuries that players pick up from time to time, and we think that in this particular match and the way the game will go, Alex and Josh are the right selections,”Pivac, Wales’ head coach said.

“Clearly everyone loves playing at home and it’s a first home game of the Guinness Six Nations for England. They will be tough opposition, they always are and both teams are still in this competition so there’s a lot at stake.”

Faletau is named in Wales’ back row and features for the first time since facing France in last year’s Six Nations. He’s joined by Ross Moriarty, who switches to blindside flanker, and Taine Basham.

Dan Biggar continues to lead the side from fly-half and is joined by Tomos Williams in the half-backs. Kieran Hardy and Gareth Anscombe, who last featured for Wales in the autumn, provide the half-back cover on the bench.

Also among Wales’ replacements, Leon Brown is in line to make his first international appearance since last July.