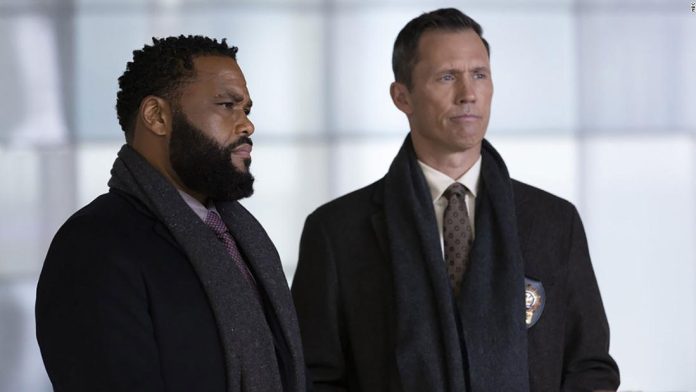 Beyond that attention-getting flourish it’s very much the same old show, only with Sam Waterston’s Jack McCoy promoted to the role of District Attorney — now seeming very Steven Hill-like, for those old enough to remember the office’s first occupant — and Anthony Anderson back as detective Kevin Bernard.
Otherwise, the formula remains unchanged, just with new pieces plugged into the machinery, among them Camryn Manheim as Bernard’s boss. And given the longevity of Dick Wolf’s creation and its various spinoffs, why mess with success?
That’s not to say the series doesn’t make a few concessions to the passage of time or acknowledge current realities. Bernard’s new partner, Frank Cosgrove (“Burn Notice’s” Jeffrey Donovan), expresses his contempt for cellphones, which members of the public brandish when he threatens to manhandle a suspect. A bit of a dinosaur, Cosgrove complains, “Should I have offered him a croissant and invited him to tea at the St. Regis?” later telling the prosecutor, “I catch ‘em. You cook ‘em. That’s how this is supposed to work.”
There’s also a reference to defunding the police, and a fleeting discussion about whether the accountability and heightened scrutiny of law enforcement in recent years — in part due to the ubiquity of cellphones — represents progress.
The characters’ personalities and power dynamics are thus already pretty clear, following series creator Dick Wolf’s maxim to flesh out details about the regular players with an eye-dropper, not a ladle. In “Law & Order,” the focus is and always has been on the cases, not the personnel.
Hugh Dancy (“Hannibal”) plays that aforementioned prosecutor, with Odelya Halevias as the other assistant district attorney. Carey Lowell, among those who sat in that second chair, also turns up in a cameo that provides yet another link to the program’s past.
Before Wolf took over a sizable chunk of NBC’s primetime real estate with his “Chicago” shows, “Law & Order” anchored the network, serving up neatly self-contained cases and the TV equivalent of comfort food without the multi-episode commitments associated with streaming.
Although the flagship “Law & Order” has been off for a dozen years, its progeny have lingered, and the revival feels as polished and familiar as if it had never left.
The police and the prosecutors. These are their stories, ad infinitum. Cue the “Ka-chung” sound.
“Law & Order” premieres Feb. 24 at 10 p.m. ET on NBC.