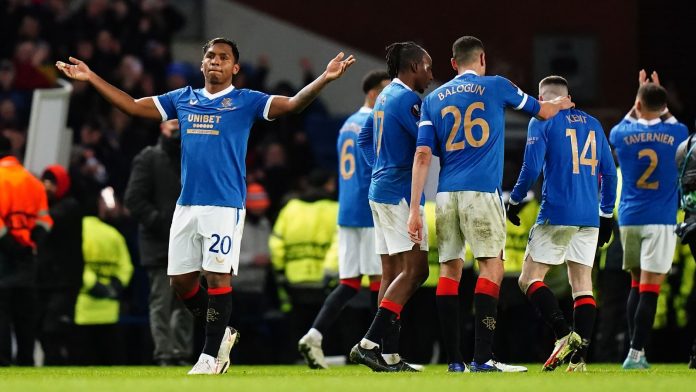 Rangers can aim even higher after dumping favourites out

Borussia Dortmund had taken on the mantle as favourites to lift the Europa League after their surprise exit from the Champions League in December and so when Rangers won 4-2 in the knockout round play-off first leg in the Westfalenstadion last Thursday, it was seen as a shock.

‘Dortmund stunned’ read the headlines and, to an extent, it was understandable to see why.

But in the return leg, Rangers showed this was no fluke. Of course, an excited Ibrox crowd played its part, spurring Giovanni van Bronckhorst’s men on throughout, but they managed the game well and eventually nullifed the threat of their opponents

Dortmund had curshed Borussia Monchengladach 6-0 in the Bundesliga prior to their trip to Scotland and, with a spring in their step, seized control of the game to narrow the aggregate score to 5-4 when Jude Bellingham and Donyell Malen struck to cancel out James Tavernier’s penalty midway through the first half.

A switch to five at the back at the break proved to be a masterstroke. Dortmund seldom threatened Allan McGregor and were then pegged back when Tavernier added his second with a superbly executed volley at the back post. Rangers should have had another, but Ryan Kent’s low finish was controversially ruled out by referee Mateu Lahoz.

The Gers have now reached the last 16 of the competition for the third season in succession and, after extinguishing the favourites by way of two professional performances, will fancy their chances of advancing even further.
Dan Long

At first glance, it looked like a job well done for Leicester. In many respects it was. A 7-2 aggregate victory over Danish side Randers and a place in the last 16 of the Europa Conference League secured for Brendan Rodgers’ side, without needing to get out of second gear.

But given the quality of the opponent placed in front of them, and the fact they travelled to Denmark with a 4-1 first-leg advantage and all-but certain of progressing from their play-off tie, Leicester’s performance left you wanting more.

Yes, Harvey Barnes’ early strike ended Randers’ hopes before they even had the chance to get off the ground, and, yes, James Maddison scored two of the finest goals you’re likely to see from the same player in a single game, but with Leicester in the midst of the worst crisis since Rodgers took charge, the opportunity to emphatically turn a corner was passed up.

With the Foxes yet to keep a clean sheet in 2022, the trip to Randers would have been earmarked as a prime opportunity to get their shaking defence headed in the right direction, but even that escaped them.

Randers were awarded chance after chance after chance, and just when Leicester looked to have escape with that elusive clean sheet, the gods of the playing surface transpired and a nightmare bobble-induced mistake from Kasper Schmeichel gifted Randers a chance they simply couldn’t miss.

With a greater calibre of opposition awaiting Leicester in Friday’s last-16 draw, and in the remainder of the Premier League season, the Foxes remain far from their best and with time steadily running out for them to turn things around.
Jack Wilkinson

Could European humbling prove a blessing in disguise for Celtic?

While Celtic were given a European lesson by Bodo/Glimt across the two legs of their Europa Conference League playoff tie, maybe come the end of the season they will look back on this comprehensive 5-1 aggregate defeat as a blessing in disguise.

Sure of Ange Postecoglou and his players would have been desperate to progress to Friday’s last-16 draw and keep alive their hopes of an incredible Quadruple this campaign – they have already claimed the Scottish League Cup, while they also lead champions Rangers by three points in the race for the Scottish Premiership and face a quarter-final trip to Dundee United in the Scottish Cup.

However, Celtic’s main focus is on getting their hands back on the title they surrendered to Rangers last season and being dumped out of Europe may just help them in that regard, especially with their city rivals still in the Europa League and facing more energy-sapping games next month.

But having rested five key players for the trip to the Arctic Circle, Postecoglou must now take all three points from Celtic’s tricky-looking trip to Easter Road – live on Sky Sports Football – on Sunday lunchtime…
Richard Morgan