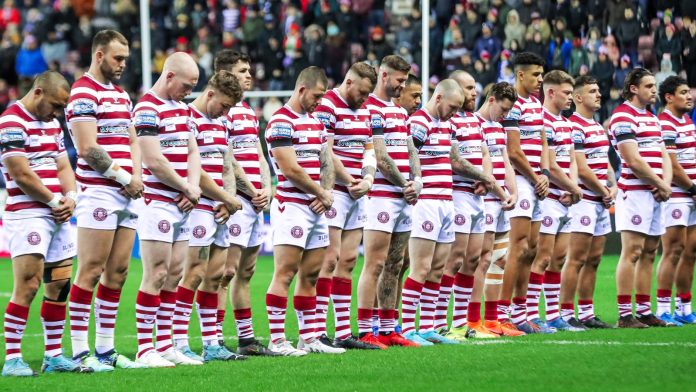 Matt Peet: “[Va’aiga] Tuigamala encapsulates what a good Wigan team should be, in that he was a good man on and off the field. He was entertaining and formidable. I think he was one of those players that people would pay to watch.”

Wigan head coach Matt Peet dedicated his team’s win over Huddersfield to the late Va’aiga Tuigamala as the Warriors extended their unbeaten run to three matches.

Former Warrior Tuigamala, who played for the All Blacks and also represented Samoa in both codes, died at the age of 52 on Friday and Wigan held a minute’s silence to honour his life.

Peet, whose side won 22-12 at the DW Stadium, said: “Tuigamala encapsulates what a good Wigan team should be, in that he was a good man on and off the field.

“He was entertaining and formidable. I think he was one of those players that people would pay to watch.

“Tonight’s performance should be dedicated to him. The commitment that the lads showed to one another, and although it might not have been the most entertaining of games, we did show glimpses of what we are capable of.

“We continue to try and be brave with the ball and to entertain, which is what we spoke about in tribute to Va’aiga Tuigamala.”

Peet was pleased his side kept their winning streak going, but he insists there is still more to come.

“I would say it was a different kind of win,” he added. “We expected a battle and that is what we got. I thought it was a tough win against a tough team.

“There were a few errors and penalties at certain times of the game that invited Huddersfield into the game. That is how they challenge you.

“At times we were our own worst enemy. It put us under pressure and it tested our commitment, character and our determination and, fortunately, it came out.”

Huddersfield head coach Ian Watson said he could take positives out of his team’s performance after seeing them lose for the first time in 2022.

The Giants conceded four tries but had enough possession to win the game.

Watson said: “I thought we competed well for large parts of the game.

“We didn’t show enough resilience in the first half. We concede a penalty coming out on the last tackle and then we defend the goal line and concede straight away.

“We worked hard to get back into the game. We gave ourselves a shot and then bombed a couple of opportunities. I think we knocked two on over the try line. You get them and you have put Wigan in a real game.

“There is a lot of positives around it. The boys have worked really hard. We just need to be smart because it’s small margins when you are playing against the top-end table teams.

“That is what we want to be, so we need to learn how to win coming to places like Wigan.”