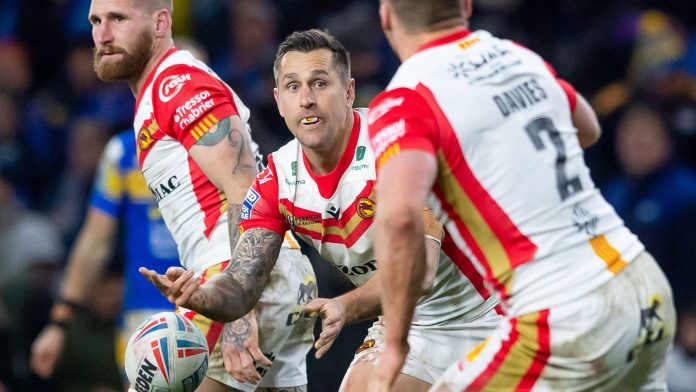 Mitchell Pearce was yellow-carded for a high tackle on Liam Tindall with 14 minutes remaining; Steve McNamara: “I thought it was pathetic. It’s a high tackle and a penalty but it’s not a sin-binning in our game.” Leeds Rhinos boss Richard Agar laments his side’s ‘painful’ attack

Australian half-back Pearce was given a yellow card by referee Jack Smith on 66 minutes for a high tackle on Rhinos winger Liam Tindall.

Catalans survived their numerical disadvantage to register a 10-4 victory at Headingley courtesy of tries from Fouad Yaha and Joe Chan but McNamara was unhappy with Pearce’s binning.

“I thought it was pathetic,” he said. “It’s a high tackle and a penalty but it’s not a sin-binning in our game. I was really disappointed with that decision.

“We all understand the reasons the rules were brought in and we’re fully on board with protecting our players but we’re frustrated at the minute. We’re all getting baffled by certain decisions and that was one of them.”

Catalans also played most of the second half without England full-back Sam Tomkins and will face an anxious wait to discover the extent of his knee injury.

“He wasn’t right before the game,” said McNamara. “He pushed himself to play but he wasn’t quite right so we took him off.”

McNamara paid tribute to makeshift prop Mike McMeeken after watching him lay the platform for their victory at Leeds.

Without four specialist props through injury and suspension, McNamara began the match with former England second rower McMeeken up front and he proved to be a tower of strength for the 2021 Grand Finalists.

“Mike said he’d play prop and he was unreal,” said McNamara. “His performance was top drawer for a person who has not played that position.

“I was sick of hearing about how many Leeds players were missing, let’s speak about the players who are playing.

“Paul Seguier hasn’t played this season and he’s had gastroenteritis for the last three days but he put his hand up to play because he knew we were in trouble.”

“It was a really tough performance,” McNamara said. “We’d not played as well as we would have liked in the first two games but I felt we thoroughly deserved the two points.

“We had to withstand a lot of pressure and I thought we did that tremendously well. With 12 men at the end we were out on feet but we somehow kept our line intact.”

Stand-off Blake Austin’s early try put Leeds ahead but coach Richard Agar admitted his side’s attacking play was at times painful to watch and they have now lost their opening three games.

“We bombed a load of chances, especially when they were down to 12 men,” said Agar.

“After last week I thought the effort was up there and our kick chase was good but our ability to execute was so far off the mark.

“We were lacking a bit of firepower but we should have some personnel back next week which will help us.”

Already without six regulars through injury and suspension, Leeds suffered another major blow with the loss of second rower Alex Mellor within three minutes of the kick-off.

“He got his head in a bad spot in a tackle and felt it straight away,” said Agar. “He was sent to hospital as a precaution so it’s fingers crossed.”