Home Sport Arteta on Lacazette: ‘He’s playing like he wants to stay’ 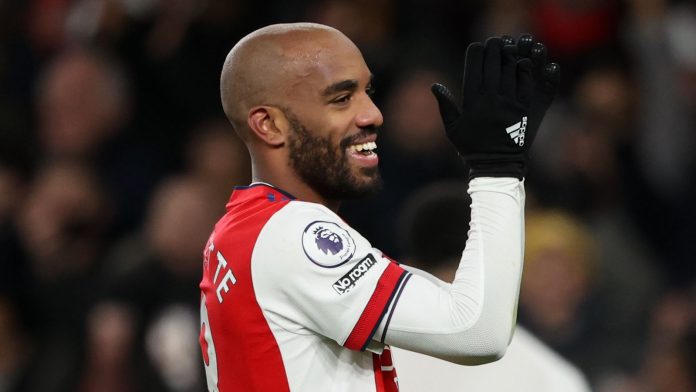 Mikel Arteta insists captain Alexandre Lacazette is behaving “like someone who wants to stay” at Arsenal after the Frenchman led the Gunners to a dramatic stoppage-time win against Wolves.

The Gunners had looked on course to lose ground on the sides above them in the race for a top-four finish but ultimately ran out 2-1 winners as Jose Sa palmed Lacazette’s effort into his own net in the closing stages.

Earlier, Hwang Hee-chan had been gifted the chance to put Wolves ahead after a mistake from Gabriel Magalhaes and they appeared set to leapfrog Arsenal into fifth before two goals in the last eight minutes turned the game on its head.

Club-record signing Nicolas Pepe levelled with a smart turn and finish just 11 minutes after he came off the bench, but it was Sa’s unfortunate glove which completed a comeback for Arteta’s side – who now sit just a point behind fourth-placed Manchester United with two games in hand.

FREE TO WATCH: Highlights from Arsenal’s win against Wolves

Arteta on Lacazette: ‘For me it’s his goal!’

Lacazette is out of contract in the summer but is still captaining Arsenal and Arteta felt his performance was not that of a man looking to leave the Emirates Stadium any time soon.

Arteta said: “When I see our striker in the 85th minute, chasing a full-back in the corner flag, winning the ball back, playing, going, fighting, missing one chance, missing two chances, going again. What can I do?

“I can only praise him and try to help him as much as possible and give him support. At the end he got the reward. For me, it’s Lacazette’s goal.

“We don’t know what is going to happen at the end of the season. What he needs to do is put aside that future. It is part of our game, we don’t have contracts that run for 20 years. That’s part of our job and we have to be conscious of that.

“There’s nothing to tell him but to praise him, because every single day he behaves like someone that wants to stay with us.”

90+ – José Sá’s own goal (94:56) was Arsenal’s latest winning goal in a Premier League game since January 2017 when Alexis Sánchez netted from the penalty spot against Burnley after 97 minutes and 14 seconds. Scenes. pic.twitter.com/Ev9Gg6Et64

Lacazette endured a frustrating evening and is still without a league goal from open play since December 11 but he kept going until the last, eventually helping Arsenal over the line.

And Arteta felt his captain summed up Arsenal’s resilience as they battled from behind to beat Wolves with a stoppage-time winner.

“Yes and that is what we need as a team,” Arteta replied when asked if Lacazette’s efforts summed up the team’s display.

“Now we are building a team with a lot of young talent and new players and they need those experiences.

“I said to them at half-time, if you want to be in the top at the end of May we are going to have to overturn results maybe two, three or four times and today was an opportunity.

“I’m especially happy when a player makes an individual error that costs a goal and the team can put that aside and win the match and everybody is talking about it.”

“I feel really happy, it is amazing to win this kind of game in the last minute.

“We really wanted this win because we know it is important to be at the top of the table.

“I knew it was the end of the game and Nicolas Pepe gave me a good ball. It went in and we are happy with the three points.

“A bit sad it is not gone down for me, I want to score, but most important is to win.

“We had a difficult January but we are coming back better in February.”

“It was coming but it came so late and Wolves will be devastated.“But credit to Arsenal. They didn’t play well but they are finding a way to win, and if they want to get that fourth spot, and for me they are in prime position, that is important.

“It’s a big victory for Arsenal because the way they celebrated, it was like they won a cup final or the league.

“But they know how big it is because Wolves pushed them all the way and they will be devastated because at 1-0, they had big chances and if they take one, it is a different game.

“However, credit to Arsenal. They deserved it in the end because they were the team that were pushing and pushing in the second half and that is a big step to going and getting that Champions League spot.”

Wolves slipped to defeat, losing from a winning position for the first time in 45 matches – but boss Bruno Lage was still pleased with what he saw.

“No, no I am proud,” he said when asked if he was disappointed with the loss. “The word is proud of what we did here, against this team, in this stadium.

2018 – Wolves have lost a Premier League game in which they opened the scoring for the first time since November 2018 against Cardiff (1-2), having gone unbeaten in 45 such matches prior to today. Stunned.

“I think we started the game very well, we have three good chances to put the score to 2-0 to us.

“After that it is football, we tried to manage the game in the best way. Arsenal played very well and scored two goals. That is why I said I am proud.

“We played better today than we did against Leicester – but this is football, we don’t win any points today.”

Arsenal’s next game is away to Watford on Sunday, March 6 in the Premier League – kick-off 2pm – while Wolves travel to West Ham on Sunday, live on Sky Sports from 1pm; kick-off 2pm.