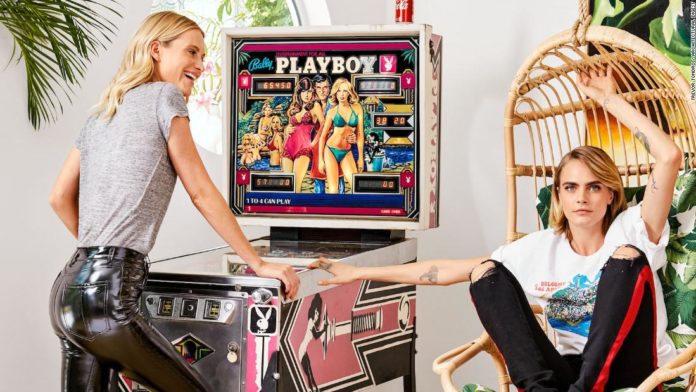 If you’ve ever wondered what’s inside a supermodel’s Hollywood mansion, then Cara Delevingne may just have your answer: A Playboy pinball machine, a tropical-themed bar and a pole-dancing party room upholstered in velvet.

The 26-year-old British model and actress offered Architectural Digest an exclusive look inside the California home she shares with her older sister — and fellow model — Poppy. Featuring in the magazine’s September issue, the pair’s cover story shoot reveals a combination of quirky retro stylings, brightly colored interiors and an abundance of plant life.

Models Cara and Poppy Delevingne opened the doors to their L.A. mansion. Scroll through to see more images from their shoot with Architectural Digest. Credit: Trevor Tondro

The Delevingne sisters have been mainstays in the fashion world since Cara (the younger by six years) was scouted by Burberry for a 2011 campaign. Poppy, a successful model in her own right, also worked for the British brand, in addition to fronting campaigns for the likes of Louis Vuitton.

“L.A. can be a lonely place,” Cara told the magazine, explaining the pair’s decision to live together. “You really have to make an effort to reach out to people. Since one of us was always coming here for one reason or another, being with family just made sense.”

“This was the chance to build our dream sister house,” Poppy added. “Miraculously, we’re still talking.”

The result is a two-story mansion decked out in vibrant pinks, emeralds and leaf print. Their eclectic furnishings and interiors include designs by US brands like Serena & Lily, Donghia and Bakarian Studio.

But the pair also looked further afield with Moroccan sinks, a chandelier by the mid-century artist Mario Lopez Torresa and a bathroom inspired by Mexican talavera ceramics.

Architect Nicolò Bini, who the sisters entrusted with transforming the property, also shared his take on the diverse design influences: “I wanted to create a true L.A. moment for them, with nods to California mid-century modern, Laurel Canyon bohemia, Beverly Hills swank, surfing culture and a little Mexico,” he is quoted as saying. “Then we tied all that in with Cara and Poppy’s Englishness to give the house another layer of Delevingne charm.”

There’s also a distinct hedonism to the mansion’s design — not least a room described by Architectural Digest as a “soundproof party bunker,” complete with disco lights, carpeted walls, a mirrored ceiling and pole-dancing facilities.

“The room feels like the Playboy Mansion with a touch of Art Deco and a David Hicks pattern thrown in for good measure,” Cara’s reported as saying. “I wanted to reclaim the concept of the bachelor pad and make it my own.”

The pair also invited the cameras into their respective bedrooms, which hint at their differing tastes. Whereas Poppy’s room boasts tropical wallpaper (hand-painted by British interiors firm De Gournay), Cara’s is altogether more sultry, with gold fittings, patterned red carpet and bespoke wall coverings — and not to mention an 11-foot-wide bed atop a mirrored platform.

“Poppy has more of an eye than I do,” Cara told the magazine of their aesthetic sensibilities. “She has impeccable taste, so I let her take the lead on the décor.”

“Basically, I’m a control freak,” Poppy added. “We each made our imprint on the design, but I was the one obsessing over the color of the curtain rings.”