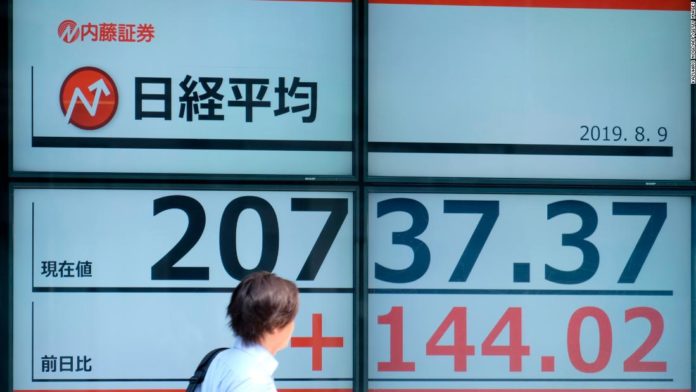 Hong Kong’s Hang Seng Index (HSI) rose nearly 0.2%. Japan’s Nikkei rose 0.7%, while South Korea’s Kospi (KOSPI) climbed 1.2%.
China’s Shanghai Composite Index (SHCOMP) was about flat following its 0.9% gain Thursday.
On Friday, the Chinese central bank guided the yuan lower for a seventh straight session. It set the daily fixing at the weakest level since April 2008.
The rate was set at 7.0136 yuan per one US dollar.
But the market was calmer. In onshore trading, the yuan was slightly weaker than it was Thursday: One dollar can now buy 7.05 yuan. In offshore trading, where the yuan trades more freely, the currency was virtually flat at 7.08 yuan per dollar.
US stock futures were down. Bloomberg reported earlier in the day that the White House plans to delay a decision on granting licenses that would allow US companies to sell to Chinese tech firm Huawei, citing people familiar with the matter.
Here are some of the other big moves at 11:00 a.m. Hong Kong time: