Home Culture Common: Love is “the best thing we got on this planet” 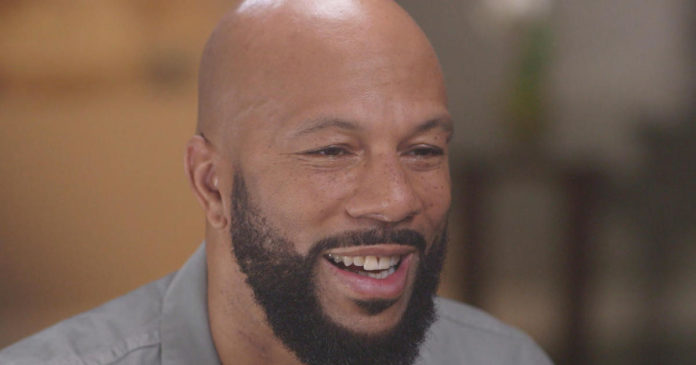 When Common appeared in the 2014 film “Selma,” and co-wrote its theme song, “Glory,” with John Legend, he had no idea the impact it would have.

“‘Glory’ was truly a life-changing moment for me,” he said. “It introduced me to a whole ‘nother audience.”

The song earned him a Grammy, an Oscar, and a Golden Globe.

And he didn’t waste his moment in the spotlight. At the Golden Globes ceremony he said, “‘Selma’ has awakened my humanity.”

He told correspondent Michelle Miller, “I didn’t want my speech to be about just, ‘Hey y’all, I won!’ It was more about using that platform to say something that could inspire people and speak for the people who are unheard and are overlooked.”

Common could easily have lived his life unheard and overlooked. He was born Lonnie Rashid Lynn on the south side of Chicago. His mother raised him after his parents split. As a kid, he dreamed of becoming a rapper, but first he would need a catchy name.

His music was a stark contrast to the gangster rap that was popular in the ’90s, and he slowly built up a core following.

But that profile, as a rapper with a message of love and social consciousness, wasn’t the one critics saw when he was invited by the Obama White House to a poetry event in 2011. “I was super-excited and honored to be invited,” Common said. “And somewhere in the course of that, I got a call that Sarah Palin was saying that I was a vile rapper. Vile, yeah. And then Bill O’Reilly and different other people of that nature just were saying, like, ‘Common is like …’ They almost labeled me a gangster rapper, too.

“And I remember Jon Stewart from ‘The Daily Show’ really defended me. Like, ‘You talkin’ about Common? The dude that did ‘Sesame Street’?  You say he a gangster rapper? Like, the Common that’s talkin’ this love stuff?'”

But Common was also making his mark outside of music, as an actor in movies and on TV. “I didn’t approach acting thinking, ‘I want to be a rapper-turned-actor.’ I approach acting saying, ‘How can I aspire to be at Denzel level, Sean Penn level? Marlon Brando? Like, Leonardo DiCaprio? Philip Seymour Hoffman?'” he laughed.

“I wanna be one of the greats.”

And soon he was working with some of the greats, apeparingin such films as “Smokin’ Aces,” “American Gangster,” “Wanted,” and “Just Wright.” “Wow. I’m sittin’ here with Morgan Freeman and Angelina Jolie. I’m in a movie with Denzel Washington!” he laughed.

But last year, while filming “The Tale,” a movie about sexual abuse starring Laura Dern, he said it triggered something long forgotten. “This memory just flooded my mind, and I said to Laura, you know, ‘I think this happened to me.'”

He said he was molested as a child by a family friend. “The more we don’t talk about it, the more it will continue,” Common said.

“Do you feel as though you need to confront the individual?” asked Miller.

He puts himself out there a lot. When his daughter, now 22, confronted him about not being in her life enough growing up, he says at first he was defensive. Then, he learned a valuable lesson. “With people that you love, you have to be able to pay attention and listen to them,” he said. “I’m working to be a better father. Our relationship is growing.”

He says his songs have helped him open up:  “Things that I never even, like, faced, I’ll talk about in music.”

And that includes his love life. He’s had some famous girlfriends in the past. These days, he’s dating CNN political commentator Angela Rye.

It’s been a remarkable year for the 47-year-old. Next month, he’s opening an arts-based charter school just blocks from where he grew up.

“Every time I was asked about the violence in Chicago, I always would say, ‘Man, we gotta create opportunities for young people,'” he said.

He also has a recent book published by CBS’ Simon & Schuster, and an upcoming album. They both share what you might call a “common” theme: love.

Miller said, “You can’t get away from it, can you?”

To watch the music video for “Hercules” by Common (featuring Swizz Beatz), from the album “Let Love,” click on the video player below.