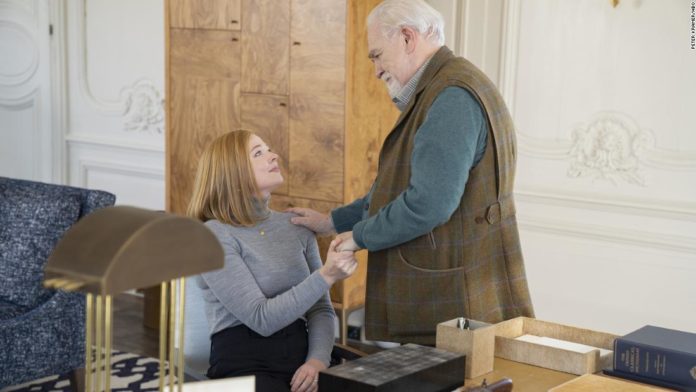 Indeed, in one of the stranger pay-cable baton passes in memory, “Succession” begins its second season on HBO the same night that Showtime’s “The Loudest Voice,” a searing profile of the late Fox News executive Roger Ailes, airs its finale. While that limited series, based on Gabriel Sherman’s book, features the Murdochs only as supporting players, the HBO show clearly uses them and other powerful media families as conduits to explore the excesses of the modern age.
For those who missed season one, “Succession” focuses on Logan Roy (Brian Cox), the aging patriarch of a major media conglomerate. His unexpected illness left three of his children (played by Jeremy Strong, Sarah Snook, Kieran Culkin) jockeying for his empire, culminating in a failed power grab by son Kendall (Strong) that seemingly left him with nowhere to turn.
The new season picks up in the wake of that scenario, with Logan back at full force, a model of sheer aggression, seeking to prove with every imperious gesture just how far the apples can fall from the tree.
Despite the show’s Shakespearean overtones, “Succession” profiles what has been a common scenario among the privileged media class — namely, a self-made patriarch (and it has almost always been men) who ostensibly wants to keep control of the company he built within the family, but who appears exceedingly grudging when it comes to relinquishing power.
Logan and his children grapple not only with the issue inherent in the show’s title, but also fending off acquisitive rivals. Toward that end, the company pursues a major target of his own: A prestige news operation, closely mirroring Murdoch’s purchase of the Wall Street Journal and the “barbarians at the gate” mentality that surrounded selling the historic paper to the corporate entity that gave the world “A Current Affair” and “When Animals Attack.”
When “Succession” premiered, writer-creator Jesse Armstrong conceded that the concept was “certainly informed by my knowledge of the Murdoch family,” but stressed that he drew inspiration from multiple sources, telling CNN that when it comes to media, “Dynastic families are all around us.”
The HBO series has taken on a life of its own, devoting ample time to the twisted relationships that these fast-lane lives can yield, with a dark comedic streak running throughout. When the wide-eyed cousin Greg (Nicholas Braun) heads off with the Roys on a private jet, he gushes, “It’s like I’m in a band. A very white, very wealthy band.”
The point of wealth in “Succession,” however, is less about perks than power, in a world where companies are bought, sold and gutted with scant thought of the collateral damage inflicted. “Money wins,” Logan grumbles in the midst of a negotiation, which, in this world and similar fictional ones like Showtime’s “Billions,” is a mantra made more distressing by the inherent truth in it.
The series somewhat undermines its real-world resonance with its more over-the-top aspects, although those are perhaps helpful in lightening what’s often a grim mood, especially in terms of Kendall, as brilliantly portrayed by Strong, a defeated, hollowed-out husk of a human being. (This season adds more firepower to the terrific cast, including Holly Hunter, Cherry Jones and Danny Huston.)
“Succession” will never be everyone’s cup of tea or snifter of cognac. For those the show speaks to, however, it’s a mordant image of a society that favors the wealthy, connected and those with birthright admission into such circles, but where the figures atop the pyramid don’t relish sharing their influence, even with those who already share their names.
“Succession” returns Aug. 11 at 9 p.m. on HBO.