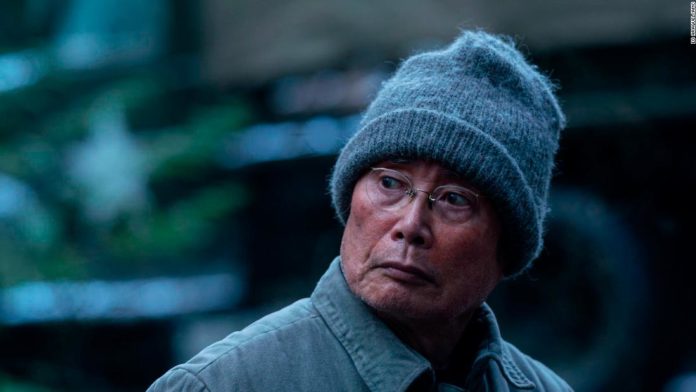 “There were 6.5 acres covered with barracks, barbwire fence, sentry towers — I recognize them,” said Takei, who not only performed as an actor on the series but also served as a consultant. “I remembered a stray dog that we adopted who would crawl into the crawl space and peer out from under it. Or the mess hall and the noise and the laughter and so forth.”
“The first day we shot in that mess hall, he said ‘These dishes aren’t chipped enough,'” recalled executive producer Alexander Woo, who co-conceived the new season and stepped into showrunner duties. “So we went and chipped a bunch of dishes so that we could have it completely authentic, but that’s the luxury of having George Takei.”
Takei has assumed many descriptive titles over six decades in entertainment — actor, “Star Trek” cast member, LGBTQ activist and social media sensation among them — but in recent years he’s personally shared his identity as a 5-year-old internee alongside his family in the relocation camps in both his native California and Arkansas. He’s told a version of his story in his autobiography, as well as metaphorically in the Broadway musical “Allegiance,” and in greater detail in the recently published graphic novel “They Called Us Enemy.” Now he continues to shed light on his experience through the lens of the horror genre, drawing on elements of kaidan, the Japanese ghost story tradition, and Japanese horror movies.
“The conceit of the show is using a genre vocabulary to tell a historical story,” Woo told CNN, noting that the first season of “The Terror” had set down a template of setting the tale in an environment where human terror was just as palpable as supernatural terror. Writer-producer Max Borenstein, who developed the first season, had seen Takei give a lecture on his experiences years earlier, and Woo picked up on his recommendation.
“George is probably the most notable living person who has lived through the internment, and he’s a working actor in our business,” said Woo. “It seemed insane not to have him involved in the show. So I got up the courage to approach him.”
“With ‘Allegiance,’ George used the vocabulary of musical theater to tell the story of the whole spectrum of emotions of the internment,” said Woo. “I felt like George would be familiar and receptive to that [horror] approach to telling the story, because it’s a style of storytelling that, hopefully, allows you to access the emotions of the characters involved.”
Indeed, though initially skeptical, Takei said he was quickly impressed with Woo’s attention to detail (“The devil’s in the details, for me as an actor”) and enthralled by the layering in of kaidan elements that intensified the storytelling.
Part of the takeaway from Woo’s talks with Takei were the everyday realities of the camp, culled from “snippets of life that George had told us about,” said the producer. “There’s a movie night scene that happens at the beginning of episode three that George had had recounted to us, where you had people who were doing all the sound effects and dubbing all the dialogue. And we just lifted that straight out of George’s memory of the place.”
“George remembered the place as a perspective of 5-year-old as an adventure,” he said. “When we show the kids [in the camp], they’re often playing. They’re playing hide-and-seek and they’re playing baseball. And seemingly having been shielded from what was really going on by their parents.”
But Takei also had a perspective on trying to preserve the beauty and dignity of life, even if unjustly incarcerated — something his father tried to maintain not just for their own family but the entire community.
“He said the scariest part of the internment was the uncertainty,” recalled Takei. “To look at us and think what kind of lives are his children going to have? What kind of future? It’s totally unknown. We’re incarcerated. They’re pointing guns at us. What’s going to happen? And it’s not knowing what’s going to happen the next hour or even the next day. Every day something new and terrifying is happening. But we spoke a little bit about resilience. My father said a part of resilience isn’t all just bullet-biting, muscle-flexing, and strength. It’s a strength to find beauty under harsh circumstances. The strength to find or create joy and strength to fall in love.”
“Having George there as sort of the spiritual leader of our production, I think made everyone feel like this was something special,” said Woo. “That even though this is the story of the Japanese Americans in the 1940s, it is not exclusively a story for Japanese Americans. It’s a story for anyone whose life has been shaped or touched by the immigrant experience, which quite frankly in this country is just about anyone.”
For Takei, it was also another opportunity to offer a reminder of a historic injustice that still carries significant resonance today.
“What we have is this endless cycle, the repetition of this kind of horror, injustice being inflicted on minority people, and we see it again today on our southern borders,” he said during a press conference at the show’s Television Critics Association press tour. “But we’ve reached a new, grotesque low. We were together with our parents. Our families were intact. What we see today now is this incredible inhumanity of children being torn away from their parents.”
“I hope this show will remind people that it is still existing today,” Takei added. “It is our hope that enough people, enough Americans seeing this, will try to keep this sort of thing from recurring in the future of this country to make it better, truer democracy.”
‘The Terror: Infamy’ premieres on Aug. 12 on AMC