Home World Why London is tracking passengers on the Tube 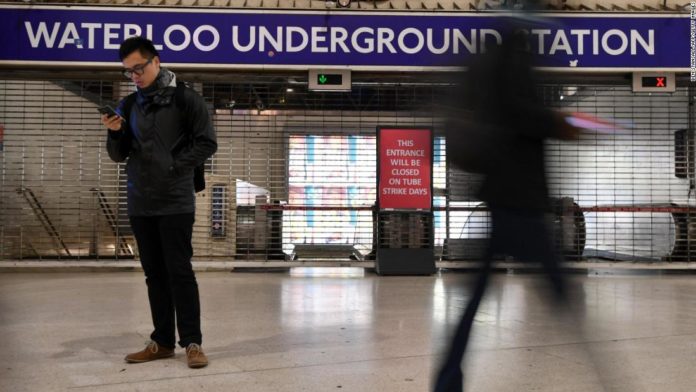 Transport for London, which operates the Tube, began collecting data in its stations this week, in order to determine how people are moving through the system and how crowded trains and platforms are. It said passengers will benefit as they will get more alerts about delays and congestion later this year. Extra trains could also be added on routes where the data indicates trains are especially congested.
It’s become increasingly common in recent years for transportation organizations worldwide to use smartphone data to better plan services. They say digital data offers insights that greatly surpass previous methods, such as user surveys.
But transportation experts believe London may have the first public transportation system to track and use individual trip data in real time. Given how large a system London operates, other cities may follow suit if the project succeeds. The practice also raises concerns about user privacy, unwanted tracking, potential hacks and the misuse of data.
In London, there is no process to obtain consent from passengers for the data collection aside from signs posted in stations, explaining that data is being collected to improve services. The signs also say people can opt out by turning off their wifi.
Smartphones aren’t the only way transportation agencies collect location data. In 2018, the Los Angeles Department of Transportation released a way for cities to track shared e-scooter and e-bike rides, by requiring the vehicles to broadcast their location to the local government. In the future, the same system will be used to monitor self-driving cars. Individual trip data can be shared with agencies up to 24 hours after trips, rather than instantly as in London. Many cities have adopted LA’s system. This summer the program spun off into a new organization that will govern it, the Open Mobility Foundation, with some of the largest US cities as board members.
London’s program relies on wifi in 260 of its stations to understand where people are, such as waiting on the platform or in a ticketing area. It can get the location of any smartphone in the area that has its wifi turned on. Phones do not need to be connected to the subway’s wifi network.
Transport for London says it will be able to monitor in real-time how long it takes people to walk from the ticketing area to the train platform, and estimate how many people are on each train. The program is an expansion of a 2016 pilot that it deemed a success.
Agencies such as Transport for London use anonymous location data as a security measure, according to the agency. But reidentifying — the practice of linking anonymous data to a person — has also been shown to become easier when combined with other databases, according to experts. London said it isn’t linking the anonymous data to other customer information, and only individual, depersonalized data is available to a controlled group of employees. Only aggregated data may be shared with other Transport for London departments, and external bodies.
Data can be shared with law enforcement if police demonstrate through a formal process that the data release is justified to prevent or detect crime or prosecute an offender, according to Transport for London.
Collecting data via wifi isn’t the only option for transportation agencies. StreetLight Data, a San Francisco-based company, supplies location data to dozens of cities, states and agencies, illuminating how cars, trucks, pedestrians and bikes move on streets. It uses location data from smartphone apps and connected cars that it buys from data collection companies such as Cuebiq, and says it has data on about a quarter of all trips through a given area.
Some areas, such as the transportation authority in Flagstaff, Arizona, say the data from StreetLight has helped them better plan services and save taxpayer dollars.
For example, transportation officials knew a few years ago that they had a traffic problem on a road leading to a nearby ski resort. With data from Streetlight Data, they examined the worst traffic days over the previous five years on the road. They concluded there wasn’t a need to build a new, expensive road, but that increasing bus service would alleviate the bad conditions, according to a transportation agency spokeswoman. Since adding more bus service in 2018, transit ridership is up and congestion is down.
Now the city is planning to use the data to better plan bus rapid transit.
“It’s more like planning with a precise laser beam than a floodlight, where you’re making an assumption about an entire community,” said Jacki Lenners, spokeswoman for the Northern Arizona Intergovernmental Public Transportation Authority.