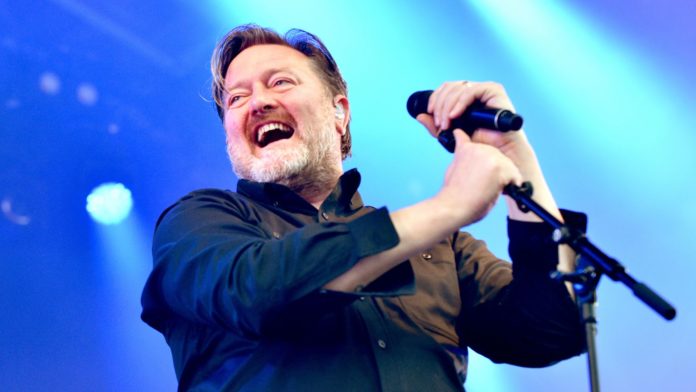 Elbow’s lead singer Guy Garvey has told Sky News the band’s upcoming eighth album will be “darker” than their last, saying: “We live in darker times.”

Entitled Giants Of All Sizes, the album is out in October.

“The age that we’re at we’ve had some of the life stuff that lots of people have when you get to your mid-forties – we’ve lost family members, we’ve lost friends, and that happened during the writing of this record,” Garvey said.

The first track from the album, Dexter and Sinister, was released at the start of the month and is more than seven minutes long.

But Garvey said that didn’t stop them from wanting to put it out first.

“Obviously we realise it’s going to get less play because of its length,” he said. “It was that long because that’s how long it had to be.

“It’s the first thing that people hear on the album and we were really proud of it so we wanted people to hear it first.”

The new record was made in a studio near Hamburg, and saw the band all playing together – after the departure of Richard Jupp meant their last album, Little Fictions, was made without a drummer in the studio.

Garvey says the setting definitely had an impact on the record.

“It’s called Cloud Hill Studios, it’s near Hamburg, and it’s a beautifully equipped old studio so we had this gorgeous vintage gear and all we wanted to do was play, really,” he said.

“So we’ve ended up finding our rock roots a little bit… not even a little bit – half the record rocks.”

The band are just wrapping up festival season, and will play at Blur bassist Alex James’ Big Feastival over the bank holiday weekend.

Garvey says the two bands go back a long way.

“We toured with Blur when we were still a baby band and they had not been playing for a while, and we did a tour of Europe with them.

“We’ve known all the boys in Blur since then so Alex’s invitation was like, ‘absolutely, of course we will’.”

Garvey says he never picked a side during the “Battle of Britpop”, when Blur and Oasis were pitted against one another in the mid-90s.

“I recognise that for the travesty of a mockery of a media sham that it was,” says Garvey, adding that he loves both bands.

“I used to use Oasis records to pump my blood up when I was walking to the housing benefit office to argue with them – their attitude was so refreshing when it happened.

“But Blur and Damon particularly is just, of our times, he’s the most prolific, amazing musician.”