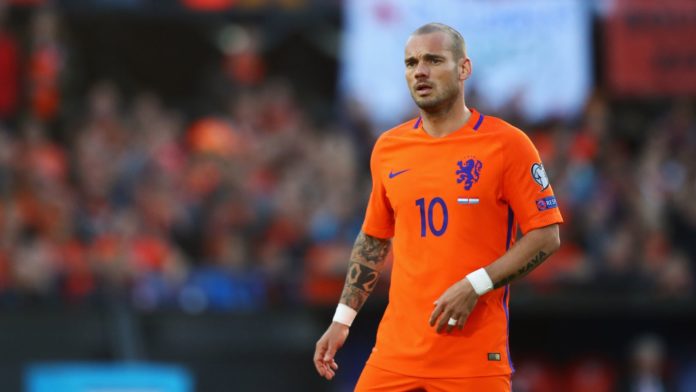 Wesley Sneijder has retired from playing, drawing a close to his illustrious career at the age of 35.

The well-travelled midfielder played in six different countries – most recently in Qatar – but called time on his 17-year career after his contract with Al Gharafa expired in July.

Sneijder ends his career with 134 international caps, the most of any Dutch player.

He was instrumental in the Netherlands’ run to the 2010 World Cup final, named the second-best player and awarded with the Silver Ball behind Uruguay’s Diego Forlan.

The Dutchman’s club career was equally successful, winning a La Liga title with Real Madrid while claiming an historic treble with Jose Mourinho’s Inter Milan in 2009-10.

It was a pleasure watching you showcase your skills with us, @sneijder101010. Best of luck for the future! #InterForever pic.twitter.com/cIGXECwyg2

Sneijder now looks to the next stage of his career, agreeing a media role with FC Utrecht.

Speaking to their YouTube channel, Sneijder said: “Now I’ve retired from football I want a nice place to share my memories. My connection to the town is big.”

Sneijder started his career with last season’s Champions League semi-finalists Ajax, where he picked up four trophies and was awarded with the Johan Cruyff Trophy in 2004.

After vastly successful periods with both Real Madrid and Inter Milan, the midfielder suffered with persistent knee problems that ultimately forced a step-down in competition.

However, Sneijder’s prolific run did not end there. He moved to Galatasaray in 2013, where he picked up eight trophies in four years before moving to French club Nice and finally Qatar.