Home Culture How Yvette Nicole Brown’s ‘Avengers: Endgame’ appearance was even a surprise to... 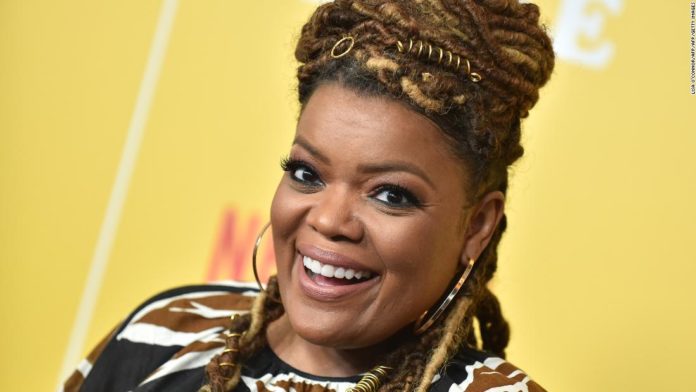 During her stint starring on the cult-favorite sitcom “Community,” Brown worked closely with Joe and Anthony Russo, who served as executive producers on the show before earning their superhero cred in the Marvel Cinematic Universe. Fellow cast members like Danny Pudi and Jim Rash had been previously recruited by the Russos for cameo roles in Marvel films, and Brown — also well known for passionate film and TV superfandom on social media and various talk shows — was just waiting for her own invitation into the MCU.
As the Russos were in the thick of filming “Avengers: Infinity War” and “Avengers: Endgame” back-to-back, Brown’s call finally came in October of 2017. “I was on the set of ‘The Mayor’ for ABC and I got a text from Joe Russo,” she recalled. “He said, ‘Hey, what are you doing two weeks from now?’ And I called him — I didn’t even text back. I called him! ‘Is it? Is this it?’ He said, ‘This is it. It’s your turn. This is the call.’
Brown immediately called her TV series’ showrunner.
“I was like, ‘I need next week off, because I’ve got to do this thing!’ And luckily, because Marvel is also under the Disney-ABC umbrella, they worked everything out and I was able to go to Atlanta for a couple of days and knock it out,” she said.
“I don’t dream that big,” she confessed. “[But] after the Russos took over, I thought, ‘There’s a good chance.’ There’s a lot of people on ‘Community,’ and there’s not enough movies for everybody to have a moment, so I was so excited that I got my chance.”
Not only did she get her chance, she got to share a scene with two of the original Avengers, Iron Man and Captain America, a.k.a. Robert Downey. Jr. and Chris Evans. Playing a pleasant but sharp-radared government worker who shares an elevator with the two time-traveling heroes while they’re disguised and infiltrating a military base in 1970, she suspects something might be amiss. Brown came away impressed with the stars, when the cameras were rolling and when they weren’t.
“I got to see them outside of their superhero costumes,” said Brown. “They’re really nice people. I’ve always thought it’s great if you’re talented and you’re rich and you’re whatever, Captain America — that’s great. How’s your heart as a human being? Those two men are lovely human beings.”
“It’s not easy being the person that comes in for a few hours or one day to do a scene when people have been together,” added Brown, explaining that the tight-knit cast and crew “welcomed me as if I was playing Queen Bee, the new crime fighter. So it was really lovely.”
Brown left the set unsure if she was going to appear in “Infinity War” or “Endgame” as production on the two films had overlapped. She assumed she show up in the opening chapter, but took it in stride when she didn’t make it on screen. “I just said, ‘Well, it was nice. It’s the thought that counts.’ And I forgot about it.”
Imagine Brown’s shock a year later, and nearly two years since she originally shot her scenes, when she was sitting in a movie theater as a regular Marvel fan taking in “Endgame,” which makes its debut on home video Tuesday. Around two hours into the film, she still hadn’t seen herself. And then, a shot of the bunker where her character worked.
“I’m sitting there with a group of in my seat like ‘This is going to be it. Oh my God, it’s an elevator! It’s me!’ I’m just sitting there, biting the inside of my jaw. I was so freaking excited, I can’t even tell you. So frigging excited! My friends were, too.”
In fact, her friends had absolutely no idea Brown might show up on screen until they saw her alongside Downey and Evans.
“I kept that secret for two years,” she said proudly. “That NDA was iron-clad. I really needed my left foot, so I never told anybody.”
The only downside of the very welcome surprise?
“I didn’t even come to the premiere,” lamented Brown. “I didn’t know I was in it! I could’ve come!”