Home Culture Cardi B and Bernie Sanders talk jobs, wages and the economy 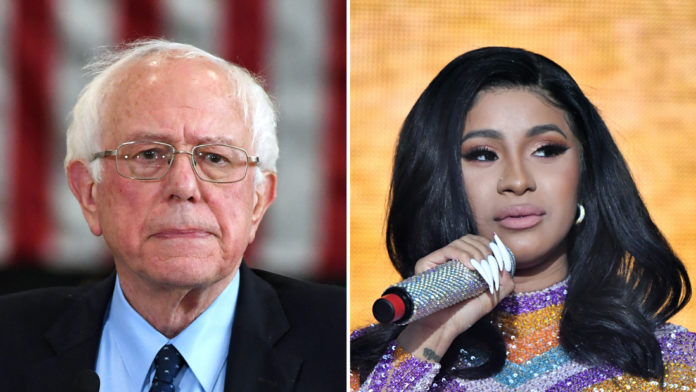 The Bronx rapper shared a clip from her discussion with the Vermont senator on her Instagram Tuesday night.
“A couple of weeks ago I asked my followers if you all had the chance to ask a Democratic candidate a question, what would that question be?” she wrote in a video caption for her 49 million followers. “The topic that was mentioned the most by all of you was about raising MINIMUM WAGE.”
In the video, she tells him how difficult it is for some people to survive on their wages.
“Like, for example me, as a New Yorker, not now, but you know, when I was not famous, I just felt like no matter how many jobs I get, I wasn’t able to make ends meet,” she said. “Like, I wasn’t able to pay my rent, get transportation and eat.”
Sanders said that’s an issue in America, adding tens of millions are living on what he described as starvation wages.
“Can you imagine somebody today earning $9 an hour?” he asked. “How do you pay your rent? How do you pay for food? How do you pay for transportation?”
Sanders said unions are crucial in helping negotiate fair wages. “What we also have to do is make it easier for workers to join unions so they can sit down and engage in collective bargaining and earn a decent living,” he added.
Cardi B also brought up the unemployment rate, saying while there may be more jobs available in America, many pay lower wages. The US economy added 164,000 jobs in July and the unemployment rate remained at 3.7%, the 17th straight month it’s been at or below 4.0%.
This is not the first time the vocal Trump critic has made a video with Sanders. Last month, the pair teamed up to film a 2020 presidential campaign video meant to appeal to young voters. Cardi B has said she’s “really sad” he did not win the presidential election in 2016.