Home Culture Todd and Julie Chrisley in custody after indictment on tax evasion and... 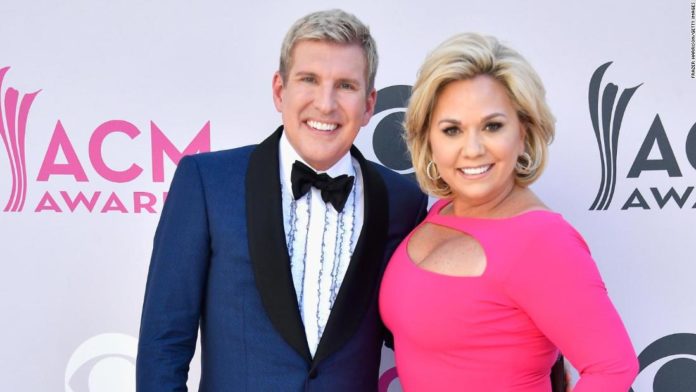 The couple surrendered to authorities early Wednesday morning, a spokesman for the attorney’s office told CNN.
They’re expected to appear before a federal judge later in the day, spokesman Bob Page said.
The Chrisleys are the stars of “Chrisley Knows Best,” a USA Network reality series, which follows their family’s over-the-top lifestyle and activities.
The 12-count indictment, obtained by CNN, also alleges the Chrisleys committed bank fraud and wire fraud conspiracy, among other offenses. Peter Tarantino, the Chrisleys’ accountant, also has been indicted on tax offenses.
Before the indictment was issued on Tuesday, Todd Chrisley denied the claims in a post on Instagram, implying the charges are based on evidence presented to investigators by a disgruntled former employee.
He alleged this employee, whom he did not name, was stealing from the family, created false documents, forged their signatures and bugged their home. Chrisley said it’s the employee’s second attempt to get the family charged and called it an act of retaliation.
“I’m telling you all this now because we have nothing to hide and have done nothing to be ashamed of,” he wrote on Instagram. “Not only do we know we’ve done nothing wrong, but we’ve got a ton of hard evidence and a bunch of corroborating witnesses that proves it.”
Chrisley wrote that the former employee’s alleged crimes included “all kinds of really bad stuff like creating phony documents, forging our signatures and threatening other employees with violence if they said anything.”
In a statement announcing the indictment, US Attorney BJay Pak said the Chrisleys were charged “not only with defrauding a number of banks by fraudulently obtaining millions of dollars in loans, but also with allegedly cheating taxpayers by actively evading paying federal taxes on the money they earned.
“Celebrities face the same justice that everyone does. These are serious federal charges and they will have their day in court,” Pak added.

The indictment says that between 2007 and 2012, the Chrisleys allegedly submitted fake bank and financial statements to get loans worth millions, the indictment says.
“During the conspiracy, Todd Chrisley directed a co-conspirator to send false information to banks,” the indictment says. For example, in 2008, a bank said it would not renew a loan without updated financial information and Chrisley allegedly ordered the co-conspirator to get it done, even though the couple did not have the funds.
“If you do not know how to do this, then find a crooked accountant to do it,” he allegedly said, according to the indictment.
Throughout the conspiracy, they allegedly submitted false documents to banks listing inflated account balances, personal financial statements containing false information about available funds, false invoices and false audit paperwork.
“As a result of false representations … a number of banks issued the conspirators millions of dollars in loans, much of which Todd and Julie Chrisley used for their own personal benefit,” the documents allege.
In a sworn affidavit in 2012, Chrisley said that he did not know the co-conspirator had submitted the documents and accused him of using their accountant’s stationery and signature without their consent.

Even after their relationship ended with the co-conspirator, the couple continued submitting false documents, the indictment alleges.
For example, during a lease application process for a home in California, the property owner wanted Julie Chrisley to provide a credit report and bank statements showing the couple had at least $486,000 in their accounts, the indictment says
“When applying to rent the home in July 2014, Julie Chrisley transmitted multiple fabricated documents that had been physically cut and then glued or taped together, and Todd Chrisley sent an email containing a false statement about the Chrisleys’ available funds,” it says.
“On July 23, 2014, Julie Chrisley sent an email to the realtor attaching a City National Bank account statement reporting a June 30, 2014 account balance of $86,790.86. In reality, the City National bank account had a balance of negative $14,530.89 in June 2014,” the indictment alleges.
The numbers had allegedly been cut and glued or taped together to make it appear that the accounts had more funds, the indictment says.
On July 26, 2014, Julie Chrisley sent a copy of a bank statement for that month showing a balance of $409,738.85 while the account had zero balance, it said.
Julie Chrisley also sent a false credit report showing her scores were between the mid-700s and 800s, while they were actually in the 500s, the indictment alleges. Again, the numbers had been cut out and taped to make it seem like her credit scores were higher, it says.
After they signed the lease and started using the property, they did not pay their rent in October 2014, the indictment says, and the property owner had to threaten them with eviction.