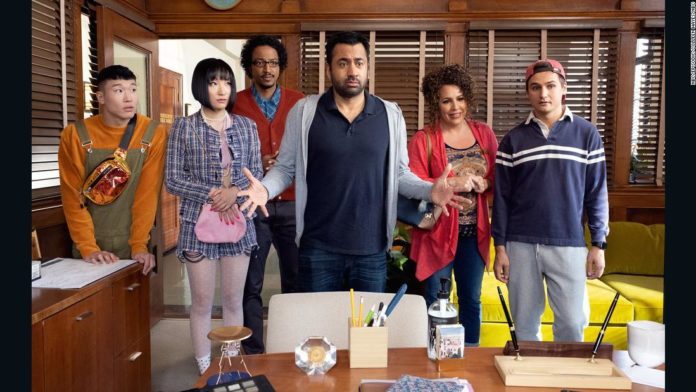 This rag-tag class is a melting pot of cultures. Joel Kim Booster and Poppy Liu play privileged children of a mysterious (probably evil) mastermind. Samba Schutte plays an Ethiopian doctor who won a citizenship lottery and is now a cab driver. Moses Storm plays a young person who was brought here as a toddler. And Diana Maria Riva plays a hard-working Dominican with a seemingly endless resume of thankless jobs. One thing they all share is an all-too-real fear of deportation.
Yet, despite how much this premise sounds like it was ripped from the headlines as melodramatic bait for anti-immigration proponents — especially given Penn’s history of working for the Obama administration’s Office of Public Liaison — “Sunnyside” is a half-hour comedy.
So, how is this political powder keg of a premise handled exactly?
“Our entire writing staff, with the exception of one person, is either an immigrant themselves or a child of an immigrant,” Matt Murray, who created the series with Penn, explained when CNN asked earlier this month during a conference at the show’s Television Critics Association press day. “We are just getting real stories.”
He added that the path to citizenship is “an infuriating process” and “we are trying to tell, sort of, a bunch of different stories around the subject. It’s not one specific thing to everyone. So we are just trying to tell real stories about people who have gone through it, and, yeah, there is comedy to be mined.”
“Sunnyside” is also peppered with Penn’s own experiences. His character, Garret Modi, has his real last name (Kal Penn is a stage name; the actor was born Kalpen Suresh Modi). He’s also the child of immigrants who switches from English to Hindi when arguing with his put-upon sister, Mallory (Kiran Deol).
Lots of comedies have tackled immigration stories, be it Andy Kaufman’s Latka on ABC and NBC’s “Taxi” or Nadine Velazquez’s Catalina on NBC’s “My Name is Earl.” And things have taken a more serious note in recent years, thanks both to a larger news focus on the issue and to the blurring definitions of comedy and drama. It’s been a plot line on The CW’s “Jane the Virgin,” NBC’s “Superstore,” Netflix and Pop’s “One Day at a Time” revival and Netflix’s “Orange is the New Black.”
But, in none of those shows, is it the focus.
In fact, those in charge of “Bob (Hearts) Abishola” could argue the same thing about their new CBS sitcom.
Although the plot could be construed as an opposites-attract romantic comedy about a small business owner (Billy Gardell) who falls for a nurse (Folake Olowofoyeku), co-creator Chuck Lorre started off his TCA panel for his new show by mandating that the romantic comedy angle is “our entrance point to the series.”
“The story we wanted to tell, the story I wanted to tell, is about the greatness of first generation immigrants [and] about the focus and discipline, the hard work [and] rigorous honesty that goes with coming here and grabbing ahold of the American dream,” he said, while whipping out a yellow hat with the letters “IMAG.”
“The premise of the series is immigrants make America great,” Lorre said, like the acronym on his hat.
The show is heavily influenced by co-creator Gina Yashere’s experiences as the child of Nigerian immigrants to England where “their qualifications didn’t matter; they had to start from scratch, go back to being poor and just work their way up and just struggle.”
“That’s basically what the story is, is just people going to different places and just working and trying to build lives for themselves and hopefully success for their kids,” she said.
Lorre added that the choice to set the show in Detroit, a city whose surging immigrant population has reportedly helped with its post-Recession resurgence, was also indicative of that. He said the Motor City is “home base for the great American industrial adventure.”
The “Big Bang Theory” and “Two and a Half Men” co-creator said he has “no idea” if there will be a blowback or strong reaction from the conservative contingent of his fanbase.
Yashere argued that “Bob (Hearts) Abishola” could help find common ground.
“A lot of the stories that you see in the show are basically incidents from my life and a lot of other immigrant lives,” she said. “It’s not about anybody Nigerian. It’s about anybody coming from anywhere. You could be Indian, Pakistani, German. It doesn’t matter. It’s just you’re going somewhere else and starting a new life.”
“Bob (Hearts) Abishola” premieres September 23 on CBS. “Sunnyside” premieres September 26 on NBC.