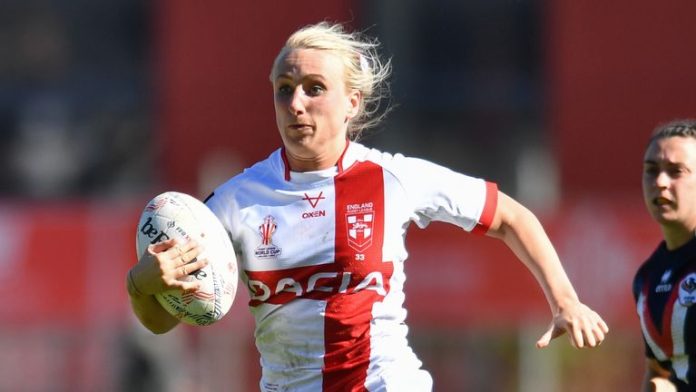 Jodie Cunningham: “We just want to enjoy the occasion. We get to play at Elland Road, we get to be live on television. These are things that are relatively new to the women taking part. Lots of people has us as favourites going into the game. I’m not sure that’s necessarily readable.”

St Helens captain and 2021 Women of Steel Jodie Cunningham chats exclusively to Sky Sports ahead of Saturday’s Challenge Cup final vs Leeds, while also touching on the importance of players setting a culture.

Speaking as a guest on the Rugby League show on Sky Sports News with Jenna Brooks, Cunningham said Saints were excited for the final but would not be taking Leeds lightly.

St Helens are reigning treble winners from 2021 and have yet to concede a point in the Challenge Cup so far this year, scoring a tournament-high 300.

“We’ve got to perform on the day,” Cunningham said.

“Lots of people has us as favourites going into the game. I’m not sure that’s necessarily readable on the results we’ve had so far.

“We haven’t come up against Leeds so far this season. Leeds have looked quality so we’re not by any way taking them for granted in this final.

“We know as Saints, we’ve got to be at our best and we’re sort of developing our own nice rivalry.

“Saints vs Leeds Women’s games have always been outstanding, they’ve always been close, highly competitive and can go either way, and I know that’s going to be the case at the weekend.

“We just want to enjoy the occasion as well. We get to play at Elland Road, we get to be live on television. These are all things that are relatively new to the women that are taking part.

“So we want to take in the occasion, not let the occasion get to us and obviously perform like we have been week in, week out.

“The no points conceded is something we’ve really prided ourselves on this season, our defence. No matter what opposition we come up against, not turning off or having those lapses of concentration versus whoever we’re facing.

“That’s going to be really important at the weekend because Leeds have just got so much threat across the board. They’re real point-scorers and Georgia Roche is on fire so we know we’ve got to really shut her down as well.

“Play our game, be defensively strong, and usually rely on Amy Hardcastle or Carrie Roberts to get over the tryline because they’re on fire this season.”

As part of her appearance on the programme, Cunningham was also asked for her thoughts on the situation at Leeds Rhinos this season on the men’s side of things.

A Leeds side which sits ninth in the Super League standings, has lost seven games from 11 so far, and parted ways with coach Richard Agar back in March.

After a period under interim coach Jamie Jones-Buchanan, Australian Rohan Smith has been confirmed as new Rhinos head coach, but setting the right culture has to be led by players, according to Cunningham.

“It’s so vast, and there’s no set checklist that you can go through to change your culture,” she said.

“For me, it has to be driven by the players. It’s okay if you’re bringing a new coach in, and Rohan’s got his own ideas about what that culture would look like at Leeds, but for me it’s a feeling.

“I know it as part of the St Helens side I’m part of now. It feels good, we know that culture feels good, and you can’t always pinpoint exactly why.

“But it’s around players taking that ownership of it. It’s about players pulling each other up.

“It’s the fact that, if there’s no coaching staff around and no one’s watching, are players willing to pull each other up?

“Are you willing? Are you confident enough? Have you got enough trust as players to pick each other up when standards probably fall below where they need to be?

“For me, that’s what we’ve developed at Saints and why we’ve got success at the minute.

“We trust each other enough to be able to have the difficult conversations.”

What now for F1’s driver market? The stars in running for last seats