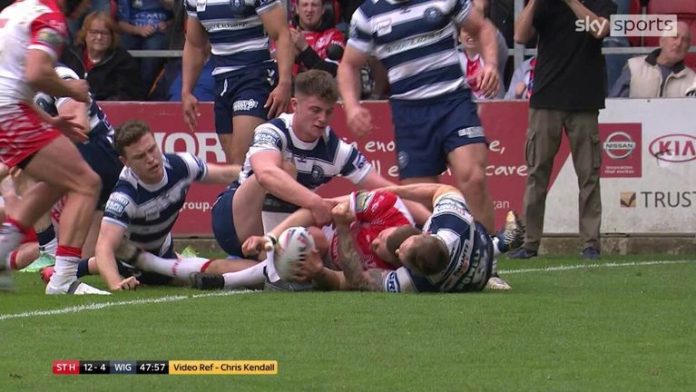 There are few things which can add to the intensity of a derby when Wigan Warriors and St Helens meet, except perhaps for when there is more than just the local bragging rights at stake.

Barely three weeks after their most recent meeting in the Betfred Super League – a 22-4 win for Saints at Totally Wicked Stadium on Good Friday – the old rivals clash again, this time on the neutral ground of Elland Road with a place in the Betfred Challenge Cup final up for grabs.

This is the first meeting of the two teams in the Cup semi-finals since 2011, when Wigan saw off St Helens 18-12 at the Halliwell Jones Stadium before going on to lift the trophy at Wembley. Warriors back row Liam Farrell was involved that day and expects things to be no different this time around.

“I don’t think you can add much more to them, can you?” Farrell, a veteran of 28 derby meetings with St Helens, told Sky Sports. “I think you saw when we played on Good Friday it was very intense, fierce and with brutal contact.

“But the added extra of it being the Challenge Cup and for a place in the final is up a place – and it’s an exciting one for us because we’ve not been there for a few years.

“Saints are the holders, so it’s a really big game and two top teams at the moment, so we’re really looking forward to it.

“Saints are an unbelievable team, but I think we’re playing all right ourselves at the moment, so it should be a good game.”

It is the same story for the team from the other side of Billinge Hill and Morgan Knowles, part of the Saints team which lifted the trophy for the first time in 13 years in the 26-12 win over Castleford Tigers at Wembley last year, is braced for a close-fought contest.

“It is going to be about small margins and bits of detail that decides,” Knowles told the St Helens Star. “It is Saints-Wigan and both teams are going well.

“We are still confident. Our main ethos of the club is hard work and effort and that does not matter who is playing. We will need that on Saturday – hard work and keep turning up.”

Just one of the previous 10 derby meetings – an 18-6 win in 2020 – has gone the way of Wigan, but aside from their meeting on Good Friday there has been virtually nothing to separate them in the Betfred Super League in 2022.

I think you saw when we played on Good Friday it was very intense, fierce and with brutal contact. But the added extra of it being the Challenge Cup and for a place in the final is up a place.

Both teams are out in front in the table on 18 points, with Saints sitting top on points difference, and Farrell revealed how their rivals’ success in winning three straight Super League titles and securing a league and cup double last year has been motivation for Wigan to be claiming silverware again.

“Regardless of how both teams are going throughout the year, there will always be the rivalry with Wigan and Saints,” Farrell said. “But I would honestly say, the way Saints have been travelling the last few years, they’ve been motivation for us as well.

“We’ve not been quite up to our standards, they’ve made us improve and get better, and we want to chase them down. We’ve been doing that the last couple of years, but Saturday is a different challenge.

“The Challenge Cup throws some things at you which you don’t expect sometimes, playing different teams, but Saturday against Saints is going to be a really intense game and we’re looking forward to it.”

A Wigan native and product of the renowned production line of players at community club Wigan St Patricks, Farrell is more than familiar with the Warriors’ history of success, particularly in the Cup which they have won a record 19 times, and the expectations on the team from the supporters.

As a member of the team which last lifted the famous old trophy in 2013, the 31-year-old is keen to get his hands on the Challenge Cup again. However, he knows they cannot afford to think beyond Saturday’s showdown with St Helens.

“It’s probably a bit of pressure and we’re probably disappointed over the last decade we’ve only won a couple of trophies, so we want to put that right,” Farrell said.

“The fans expect a lot, they’ve got high expectations and want to win trophies, and we’ve not delivered that for a few years now.

“We’ve got our own group and we want to write our own history, and we’re really trying to do that.”