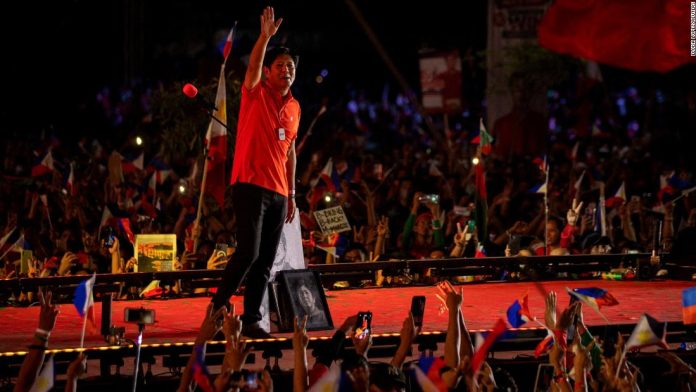 While Duterte later clarified that he was not planning to sever ties with the United States — a treaty ally and longstanding diplomatic partner — he continued to threaten to downgrade the relationship while pivoting to China, despite a simmering territorial dispute with Beijing.
Now, with the election to decide Duterte’s successor days away, analysts say there is an opportunity for a reset of the Philippines’ relationships with both major powers — and its outcome could shift the balance of power in Asia.
How that shapes up may come down to the aims of current presidential frontrunner Ferdinand Marcos Jr. — the son and namesake of the Philippines’ late deposed dictator — who is widely seen as more friendly to China than his nearest rival Leni Robredo, the sitting vice president.
Who Filipinos pick when they cast their votes on Monday, will have ramifications far beyond the country’s borders.
For the US, close ties with the Philippines, including American troop rotations there under a two-decade-old agreement, are critical to its strategy in the region, where Washington seeks to counter Beijing’s growing footprint.
The Philippines has been on the front line of those Chinese ambitions in the South China Sea, with Manila in recent years accusing Beijing of trying to intimidate its coast guard vessels and assembling a “maritime militia” to crowd out its fishing boats. Beijing claims large swaths of the resource-rich waters as its own, even after Manila challenged that in an international court of arbitration and won.
But Duterte did little to assert that 2016 court decision, analysts say, and how much the next Philippine President uses the ruling to push back on an expansive China will send signals not only to the leaders of other Southeast Asia nations who dispute China’s territorial claims — but also to Beijing.
“The Philippines is of very significant strategic importance to both (the US and China). China is right now consumed by domestic matters but it also continues to expand its activities in the South China Sea,” said Joshua Kurlantzick, a senior fellow for Southeast Asia at the Council on Foreign Relations in New York.
“And the US is definitely going to invest significant effort bonding with whoever leads the Philippines, simply for strategic reasons — the Philippines is of critical strategic importance, and there are also such close longstanding ties,” he said.

Manila has long sought to balance its ties with these powers — or play them off one another — and any President coming to power will need to navigate relationships with both, especially in the wake of Duterte’s pro-China bent.
Marcos, whose running mate is Duterte’s daughter, Sara, has for years called for Manila to deal with Beijing bilaterally over territorial claims.
Critics see his stance as deferential to China, and in recent months Marcos has met the Chinese Ambassador Huang Xilian.
Beijing has praised its relationship with Duterte ever since his first visit to China — described by Chinese leader Xi Jinping last month as “an ice-breaking trip marking a milestone in the history of China-Philippines relations”, with Xi also saying China “stands ready” to “constantly elevate” relations.
The goodwill appears to extend to Marcos, who has been building a rapport with Chinese Ambassador Huang Xilian in recent months. Huang said during an event in October that it was a “great honor” to meet Marcos and that as those in support of Sino-Philippines ties, “together, we are opening a brighter future.”
When it comes to the US, one issue is a human rights suit in the US seeking compensation for the victims of the late, elder Marcos’ brutal regime.
Analysts suggest could this complicate any future presidential visit to the United States, were Marcos to win. While Marcos has recently characterized the relationship with the United States as “special,” a perceived snub from the White House could push Marcos closer to Beijing.
But how far he could lean toward China may be constrained by a public that wants to see a pragmatic, but firmer line on China than they did under Duterte, according to Richard Heydarian, a professor of political science at Polytechnic University of the Philippines. Marcos would also need to manage a military establishment that’s critical of China, he added.
“And for (Robredo), she also cannot go for a confrontational policy towards China, because the reality is that the majority of Filipinos and the Philippine military, even, recognize the Philippines’ limitations in terms of standing up to China … (and) a lot of Filipinos also expressed their willingness to support economically productive relations with China,” he said, adding Robredo too is open to economic engagement, insofar as it doesn’t conflict with Philippine sovereignty.
Duterte’s own final years in office underline the sensitive balance, as the President dialed back his own rhetoric against the United States, not only backing out of a vow to end the agreement governing the presence of American forces in the country, but hosting a large joint military exercise with US troops and pushing back on Chinese maritime presence — amid a rising sense that China has not delivered on promises to the Philippines.
“The reality is that China was not reciprocating President Duterte’s charm offensive … China’s pledges of investment, which were largely illusory, made Duterte make a lot of geopolitical concessions,” Heydarian said, adding that in the meantime China continued to press its own claims.

Whether, or to what extent, Marcos would try to extend Duterte’s pivot to China is elected is not yet clear, experts say, pointing to the absence of a detailed foreign policy — or information on who would lead his foreign affairs.
But there are signs that Marcos, unlike Robredo, may hew more closely to Duterte when it comes to handling issues in the South China Sea.
Robredo has made clear throughout her campaign that she would engage China multilaterally, relying on strength in numbers alongside friendly nations “to help a small country like the Philippines do what it takes to use the 2016 (South China Sea) arbitration award … (toward its) national interest,” said Charmaine Misalucha-Willoughby, an associate professor of international studies at De La Salle University in Manila, the Philippines.
For Robredo to allow certain deals with China, like joint oil exploration in the South China Sea, the “buck stops” with whether China acknowledges the court ruling on the Philippines’ claims, she added.
Marcos, too, in a debate earlier this year, appeared tough on China — saying he would send warships to the South China Sea to protect Philippines’ territorial claims. But a dearth of details has raised questions as to whether this was an idle claim. Instead, analysts point to his long-standing calls for bilateral resolution.
“Marcos has insisted that he will deal with China in a more bilateral manner, which somehow is what Beijing wants … and puts the Philippines, again, in a position of weakness,” said Aries Arugay, a visiting fellow at the ISEAS-Yusof Ishak Institute in Singapore.
But Arugay, too, points to the issue of balance, adding that even if Marcos pursues a deeper relationship with Beijing, that may not necessarily come at the expense of a relationship with the US.
“Just like any other Philippine President, if he wins, (Marcos) will also try and approach the US, because whatever happens, the new President will have a chance for a reboot,” he said.