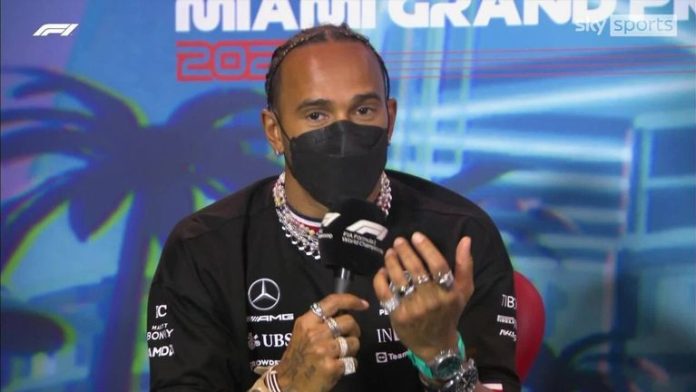 “It seems unnecessary to get into this spat,” says Lewis Hamilton as he also jokes: “If they stop me, we’ve got spare drivers.”; Hamilton reveals he has messaged FIA president Mohammed Ben Sulayem in bid to avoid “silly” fight

By Matt Morlidge in Miami

Lewis Hamilton has slammed the FIA’s crackdown on drivers wearing jewellery, calling it a “step backwards” and an “unnecessary spat”.

Hamilton also joked that he is willing to miss a race if F1’s governing body insists on the ruling, with the Mercedes driver adamant that he cannot and will not remove some of his items.

Last month, the FIA revealed they were reinforcing a ruling on jewellery and for this weekend’s Miami GP the demand – focussed on safety – is for the first time part of the scrutineering process, meaning all drivers have to conform or risk punishment by breaking the International Sporting Code.

But Hamilton has made it clear that he will defy the rule and before the Miami GP, the sport’s most successful driver was covered in jewellery as he faced the media to discuss the crackdown and whether he feels targeted.

“I feel like it’s almost like a step backwards if you think of the steps we’re taking as a sport and the more important issues and causes that we need to focus on,” said Hamilton, 37.

“It seems unnecessary to get into this spat.

“I think we’ve made such great strides for the sport… and this is such a small thing.”

Hamilton says he only ever wears earrings and a nose ring – which is “welded on” and according to the Englishman cannot be removed – while driving.

Hamilton said his platinum jewellery was non-magnetic for MRI scans and “has never been a safety issue in the past”.

While it is not yet clear what the punishment could be for wearing jewellery or whether the FIA will give Hamilton an exemption, Hamilton added: “If they stop me, so be it.

“We’ve got spare drivers who are ready and prepped for the weekend. There’s a lot to do in the city anyway so I’m good either way.”

Eager to avoid a collision course with the FIA, Hamilton revealed on Friday that he had messaged new president Mohammed Ben Sulayem about the rule.

“I reassured him that I want to be an ally, I don’t want to fight with you guys over this,” said Hamilton.

“It’s about individuality and being who you are. This is very, very silly.”

“I think we’ve got bigger fish to fry, bigger things to do, more impact to have and so I think that’s really where the focus should be.”

Hamilton added that he would happily sign a waiver that allowed him to continue wearing jewellery in the car and took the safety responsibility away from the FIA.

He was also backed by his fellow drivers, with Pierre Gasly – sitting next to Hamilton in the press conference – particularly supportive.

“I appreciate the FIA looking after our safety,” said Gasly. “But in my personal case I have also religious items that I wear with me, when I’m racing, which are important to me, which I don’t feel comfortable not having with me driving the car.

“And I do feel it’s a little bit personal. We should have the freedom to do what feels right for us.

“At the end of the day, we have the responsibility to go out there, put our lives at risk… and I do feel it should be a personal choice. But I respect the FIA and their will to always improve the safety.”

Four-time F1 world champion Sebastian Vettel added: “I think it is a bit unnecessary to blow this topic up.

“Probably at this stage it’s more of a personal thing, and I feel particular in a way targeted to Lewis. We are old enough to make our own choices.”

What is the FIA’s guidance on jewellery?

In his pre-Miami GP notes, race director Wittich confirmed a crackdown on jewellery, as well as drivers wearing normal underwear beneath their approved flameproof underwear – which is believed to be the FIA’s bigger concerns.

The note on jewellery read: “Metallic objects, such as jewellery, in contact with the skin can reduce heat transmission protection and thus may increase the risk of burn injuries in the event of a fire.

“The wearing of jewellery during the competition can hinder both medical interventions as well as subsequent diagnosis and treatment should it be required following an accident.

“The presence of jewellery can slow, due to the risk of “snagging”, the emergency removal of driver safety equipment such as helmet, balaclava, and overalls.

“In the case that medical imaging is required to inform diagnosis following an accident the presence of jewellery on the body can cause significant complication and delay.

“In the worst case the presence of jewellery during imaging may cause further injury.

“Jewellery in and/or around the airway can pose specific additional risks should it become dislodged during an accident and either ingested or inhaled.”

Rodgers: Packers game in London ‘a dream’ | ‘I wanted to go early’