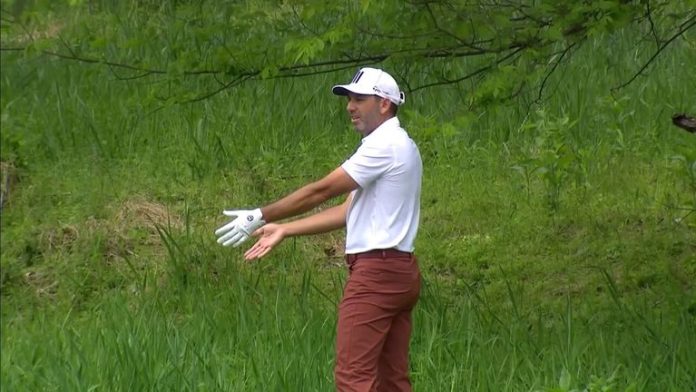 Garcia has asked for a release to compete at Centurion Club from June 9-11, the opening event of the LIV Golf Invitational Series; Former Masters champion declined to speak to the media after the first two rounds at the Wells Fargo Championship

Sergio Garcia received an apology from the PGA Tour for the penalty he received at the Wells Fargo Championship, although the Spaniard continues to face criticism for his on-course comments about a probable move to the Saudi-backed rival circuit.

Garcia sent his tee shot into the hazard at TPC Potomac’s par-five 10th hole during an opening-round 67, with a PGA Tour rules official informing him that he exceeded the three-minute time limit to search for his ball by the time it had been found.

The Ryder Cup legend protested the decision, suggesting the time had been started too early, with the on-course microphones picking up comments by Garcia suggesting he will soon be competing away from the PGA Tour.

“I can’t wait to leave this Tour,” Garcia was caught saying by an on-course microphone. “I can’t wait to get out of here, my friend. A couple of more weeks and I won’t have to deal with you anymore.”

The comments were likely a reference to the forthcoming LIV Golf Invitational Series, with Garcia among the players requesting a release to compete in the opening event at Centurion Club in Hertfordshire from June 9-11.

The PGA Tour later released a statement admitting that the referee had not taken into consideration the time taken by Garcia to reach the area where his ball was thought to be, which would have prevented it from being declared as lost and the subsequent penalty drop.

The statement said: “To clarify, the time spent by Garcia trying to access the other side of the creek should have delated the start of the search time clock, and the ball would have still been “in play” if not for that error.

“Garcia was informed of the developments following round. Under the Rules of Golf, Garcia’s score does not change despite this clarification.”

What should Garcia do next?

Garcia declined to speak to the media after both his opening round and a one-over 71 on Friday, with former PGA champion Rich Beem believing the 42-year-old needs to explain why he spoke out in the way he did.

“I think he needs to clarify what he said,” Beem told Sky Sports News. “We can sit here and speculate all day long on what his motivation was and why he said what he said.

“I think that Sergio sometimes lets his emotions get the better of him and I think he was screaming out something that he was fairly unjust in the ruling. He blurted out something that I believe he probably wishes he could bottle up and put back, but he can’t.

“Charley Hoffman did the same thing in Phoenix, where he felt he was wronged by a rules official and blamed them for a mistake. It’s such an imperfect game, but everybody gets it wrong at some point in time and yesterday it just came to a head with Sergio.”

Has Garcia’s reputation been tarnished?

Garcia has 11 wins on the PGA Tour – most recently at the 2020 Sanderson Farms Championship – and has earned more than $54 million during his lengthy career on the circuit, with former PGA Tour player John E. Morgan surprised by the Spaniard’s behaviour.

“Why, Sergio, why? Literally, it’s painful isn’t it,” Morgan told Sky Sports News. “Why do you have to come with a comment like that? It [LIV Golf Investments Series] is obviously on his mind, but he doesn’t need to do it.

“He has made a bunch load of money and been given every opportunity a golfer could ever dream of [in his career]. He has represented Europe in Ryder Cups, he is our best points scorer, travelled the world a hundred times over and played on both Tours.

“He’s a great ambassador for the day and then spoils it by [saying] something like that. To me, it broke my heart actually last night when I saw that. I was quite bemused that a guy like him, who has got so much that he has been given over the years – and played well to earn it – but at the drop of a hat lets it go to waste with a comment like that.

“It makes him sound ungrateful because there has a lot that has been given to Sergio and a lot of that he has got out of the game. Yeah, he was hot under the collar and not happy, but it’s going to tarnish him quite a bit.”

The opening event of the Greg Norman-fronted series is the week before the US Open and clashes with both the RBC Canadian Open and the Scandinavian Mixed, with players having to request releases from the PGA Tour and DP World Tour in order to feature.

Lee Westwood and Phil Mickelson are among the players to have already confirmed their intention to play, along with British Masters champion Richard Bland, although many of the world’s top players have distanced themselves from the breakaway circuit.

How to use Quick Note in macOS to quickly save anything

Qantas and Jetstar celebrate the reopening of Japan for international travellers