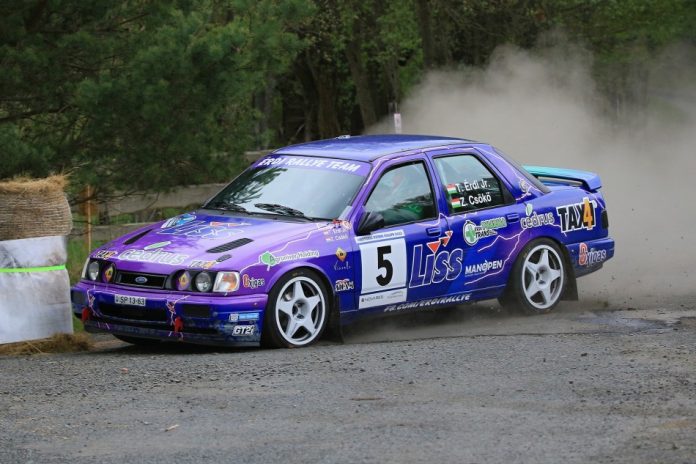 The no5 Ford Sierra RS Cosworth 4×4 of Tibor Erdi Jr and Zoltan Csoko finished the opening day of the 30thHistoric Vltava Rallye 11.9 seconds ahead of the rest of the field after a day that saw many cars retire from the rally.

The no6 Lancia Rally 037 of Ville Silvasti and Risto Pietilainen finished the day in second place, with the no1 Audi quattro of ‘Zippo’ and Denis Piceno in 3rd overall and leading Category 3.

The Italians were struggling for pace and a drive shaft broke on stage 5, allowing the no2 Porsche 911 SC of Karl Wagner and Gerda Zauner to close the gap.  The Audi was repaired before the start of stage 6 and the gap between the two Category 3 cars was just 3 seconds at the end of the last stage of the day.

The battle for the place as the top EHRC eligible car in Category 2 was a between the two Porsche 911s of Paolo Pasutti and Giovanni Campeis and Round 1 winners Carlo Mylle and Olivier Laporte, with the day ending with a 12.1 second advantage to the Italians.

In Category 1 the first leg ended with the no22 Ford Escort Twin Cam of Ernie and Karen Graham holding a 2 minute 23 second advantage over championship leaders Antonio Parisi and Giuseppe D’Angelo in the no24 Porsche 911 S, the British crew taking the top time on all six stages.

The opening stage of the day saw Round 1 winner Pascal Perroud leading by 2.5 seconds but on the next stage the BMW M3 E30 suffered an accident, sidelining the Round 1 winner.

There were more retirements with Marty McCormack’s Ford Escort suffering a blown engine on stage 1, with reigning Category 2 Champion Vojtech Stajf also retiring on stage 1, the Toyota Celica suffering an issue with the turbo.  Stage 2 saw the no21 Ford Escort and the no32 Volvo Amazon both retired due to mechanical issues.

At the end of the opening day further retirements came with the no7 BMW M3 retiring with an electrical system issue, the no14 Porsche 911 with accident damage, the no35 Skoda with mechanical failure, the no37 Lada with an unknown issue and the no11 Porsche with a blown engine.

Leg 2 of the 30th Historic Vltava Rallye with feature seven stages to decide who will be taking the winners podium on Saturday evening.

Professor Joe is ready to school us in the art of...