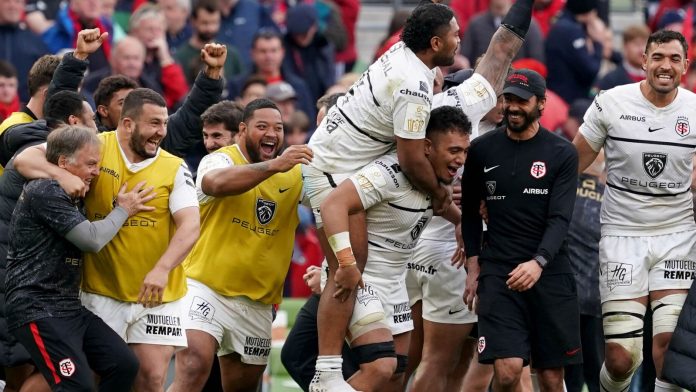 Toulouse beat Munster in penalty shootout with sides tied at 24-24 after extra time at Aviva Stadium; Ben Healy (twice) and Conor Murray miss place-kicks for Munster as Toulouse triumph 4-2 in Dublin; Toulouse will now face either Leinster or Leicester in semi-final

Defending European champions Toulouse progressed to the semi-finals in dramatic fashion as they registered a penalty shooutout victory over Munster in Dublin, after the match had finished 24-24.

Played in front of over 40,000 supporters at the Aviva Stadium due to Thomond Park being unavailable as a result of Ed Sheeran concerts at the venue, Munster scored tries through Alex Kendellen, Keith Earl and Mike Haley, as they led by 10 points until 14 minutes to go, and by three until four minutes to play.

Indeed, the injury-enforced exit of skipper Peter O’Mahony – later named player of the match – with Munster still ahead by 10 proved critical.

No points were shared during extra time, with Munster missing two drop-goal attempts through Ben Healy and Ramos missing for Toulouse, and as the sides were already level on tries scored, place-kicks proved the decider.

Having nominated three kickers each, Munster missed three of their five attempts through Healy (twice) and Conor Murray, with Toulouse landing four via Antoine Dupont (two), Ntamack and Ramos.

Shorn of five starters in prop Dave Kilcoyne (neck), second row Tadhg Beirne (thigh), No 8 Gavin Coombes (ankle), flanker John Hodnett (knee) and wing Andrew Conway (knee), Munster began brightly with ball in hand but were halted early on for a neck roll at the ruck near the Toulouse 22.

Toulouse got into their attacking groove in response, and Munster had Murray to thank for a crucial try-saving tackle on Thomas Ramos, before flankers Kendellen and O’Mahony combined for a huge breakdown penalty to clear the danger.

O’Mahony led a counter-ruck down the other end as Munster carved out a spell of territory, with the Irish province then kicking to the corner after Toulouse went off feet – a decision which saw Kendellen do brilliantly to power over for the opening try of the tie.

The Toulouse response was immediate as centre Pierre Fouyssac sprinted through on a lethal line-break, and though Munster scrambled to put him to ground, Ntamack – after dropping the ball initially – scooped up and stretched to score, with the score surviving as TMO check for a knock on.

The Toulouse scrum had had the better of the opening exchanges, and on the French side’s first put-in, they romped forward for a dominant scrum penalty to set down a marker.

Another penalty against Munster – this time for a high tackle – saw Ntamack kick to the corner, and it proved the wrong decision when Munster’s pack superbly forced the ensuing maul unplayable to win possession back.

Toulouse won a penalty against the head at the resultant scrum, however, meaning Munster failed to clear the danger, and the Top 14 outfit then called for a scrum as their mode of attack following the decision.

Given the perfect platform to work off once the Toulouse pack romped forward again, their skilful backs strung play across the pitch at pace for wing Lebel to finish a marvellous score on 27 minutes.

Ntamack successfully slotted through the difficult conversion for a 14-7 lead, before Munster full-back Mike Haley knocked on their next promising attack in the Toulouse half.

On 34 minutes, an O’Mahony lineout steal paved the way for Munster to add further points as Toulouse were penalised for going off feet at the next breakdown, but Carbery drilled wide from 40 metres out with a poor strike.

With five minutes of the first half to go, the officials seemed to miss Toulouse carrying the ball back over their own try-line, but Munster put it behind them to notch their second try with a minute to play.

A chip and chase by Chris Farrell earned Munster a lineout in the 22, and once Springbok centre Damian de Allende did damage with a powerful carry and loosehead Josh Wycherley showed outstanding hands near the try-line, Earls was on hand to touch down out wide following a long Carbery pass.

Carbery put his earlier miss behind him to land an exquisite conversion from near the touchline, leaving the half-time score of a pulsating contest 14-14.

A stirring spell of counter-rucking by Munster after a vital Earls tackle gave them the opening chance for points in the second period, but Carbery was off target again with another poor miss.

Again, Munster put the blow behind them as Haley slid over for their third try on 44 minutes after a magnificent Farrell break on the outside followed Simon Zebo expertly claiming a high ball.

Toulouse responded with a series of impactful carries which edged them up the pitch and into the 22, with Munster only quelling the attack through a superb Wycherley breakdown penalty.

On 51 minutes, Toulouse lock Rory Arnold was then sent to the sin-bin for lifting Zebo above the horizontal in the tackle, with the rangy lock perhaps fortunate to avoid red as the back of the Munster wing’s head hit the turf.

Replacement Toulouse hooker Peato Mauvaka earned a key breakdown penalty in his own 22 with Munster attacking vs 14, but Munster then displayed their own fabulous piece of defending as O’Mahony and Jack O’Donoghue combined to hold up Dupont and win a turnover.

Maxime Medard next knocked on a Murray box-kick which looked to have travelled too long, with momentum firmly with Munster, and when Fouyssac tackled Farrell off the ball following the scrum, Carbery tapped over the simple effort for a 10-point lead at 24-14.

On overthrown Diarmuid Barron lineout on the Toulouse 22 saw Munster’s next chance slip away, and with Toulouse restored to 15, Farrell knocked on deep in the Munster half to invite a flurry of Toulouse pressure, which was only lifted when O’Mahony conjured up another remarkable breakdown turnover.

O’Mahony was forced to depart thereafter with an arm injury, but Munster’s goal-line resistance refused to wilt as Zebo brought down Pita Ahki out wide, before Jason Jenkins stripped the ball back.

Out of nothing, Toulouse then struck for a sensational try with 14 minutes left as a beautifully disguised Mauvaka no-look pass saw Lebel sprint into space and step Zebo to score.

A penalty against Barron for not releasing at the breakdown before a jackal attempt saw Toulouse back into the Munster 22, but a lengthy stanza of Toulouse attacking was ended when Cyril Baille knocked on under the challenge of John Ryan.

But, again at the scrum, Toulouse won a penalty against the head, which Ramos dispatched to level matters with little time left on the clock.

Replacement second row Thomas Ahern then gave away a penalty from the restart for playing a man in the air, which saw Toulouse handed another opportunity to attack in the closing stages, but two final knock ons saw the chance go.

A final penalty against Toulouse for hands in the ruck handed Ben Healy a 55-metre penalty attempt with the clock in the red, but his effort dropped inches short to leave the game needing extra time.

Two great chances passed Munster by when Ahern sprinted through but was just scragged back, before De Allende kicked when he ought to have passed down the left.

Into the final period of extra time, and in a near unbearably-tense atmosphere, Healy put a drop-goal attempt wide on penalty advantage, before Munster gave up yet another penalty at the scrum on their own put-in, this time when well-placed within the Toulouse 22.

With two minutes to go in extra time, it was Toulouse’s turn to strike wide with a drop-goal as Ramos failed to connect properly, before Healy sliced wide with the very final kick of the match for Munster.

It meant place-kicks to decide a European Cup clash for just the second time, and Toulouse to break Munster hearts in Europe again.