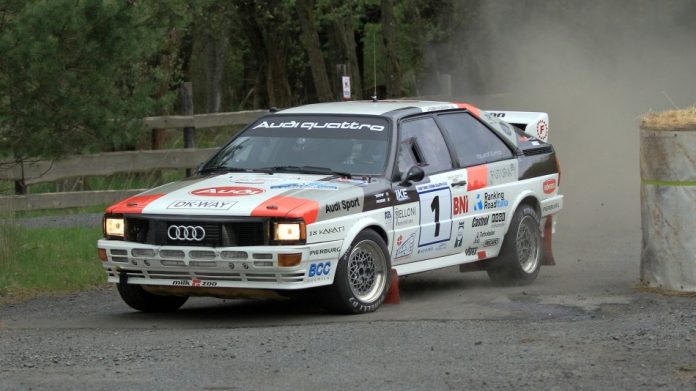 After finishing third at the end of the first leg of the 30th Historic Vltava Rallye, the no1 Audi quattro of reigning Category 3 Champions ‘Zippo’ and Denis Piceno posted the fastest overall time on four of the seven stages to take the finish 23.8 seconds ahead of the no6 Lancia Rally 037 of Ville Silvasti and Risto Pietilainen, the Finns securing the Category 4 win in the Czech Republic.

Overnight leaders, Tibor Erdi Jnr and Zoltan Csoko, finished third overall and second in Category 4 on their FIA EHRC debut in the no5 Ford Sierra RS Cosworth 4×4.  The Hungarians finished 1 minute 32 seconds behind the victorious Audi.

Third place in Category 4, and 4th overall, went to the no19 Opel Manta 400 of Juergen Geist and Melanie Kalinke, the best ever EHRC finish for the German team.

Second in Category 3 went to the no2 Porsche 911 SC of Karl Wagner and Gerda Zauner.  The Austrians had started the day in 4th overall but a broken engine mount and ruptured fuel line on SS8 caused them a 10-minute delay, costing them nine places overall and dropping them to 4th in Category.  After repairs Wagner fought his way back up to second by the end of the rally.

Third place in Category 2 went to the no12 Ford Escort RS1800 MKII of Ferenc Wirtmann and Jozsef Kerekes, who finished 2 minutes 34 seconds behind Wagner and Zauner.

The Category 2 win on the Historic Vltava Rallye went to the National Class Opel Kadett of Miroslav Janota, with the no20 Porsche 911 of Paolo Pasutti and Giovanni Campeis coming out on top amongst the EHRC contenders, the Italians beating the Championship leading crew of Carlo Mylle and Olivier Laporte in the no16 Porsche by 4 minutes 25 seconds at the end of Stage 13.

Third place in Category 2 went to the no29 BMW 2002 Tii of Pietro Corredig and Sonia Borghese, who were nearly 11 minutes behind the two Porsche at the end of the final stage.

Ernie and Karen Graham made it two wins from two starts in Category 1, the British couple finishing the rally in the no22 Ford Escort Twin Cam 7 minutes and 7 seconds ahead of reigning champions Antonio Parisi and Giuseppe D’Angelo in the no24 Porsche 911 S.  The no25 BMW 2002 Ti of Sverre Norrgard and Ari Koponen finished third, 4 minutes 21 seconds ahead of the no36 Alfa Romeo Giulietta TI of fellow Finns Teuvo Hamalainen and Pirjo Rosberg.

The no10 Ford Sierra RS Cosworth 4×4 of Anders and Ingrid Johnsen rejoined the rally after Anders was forced to sit out the first day due to a medical condition.  The Swedes also got into the swing of things, posting the 4th fastest time on the final stage of the day.

Round 3 of the FIA European Historic Rally Championship will be the Rallye du Chablais in Switzerland on the 2-4 June.