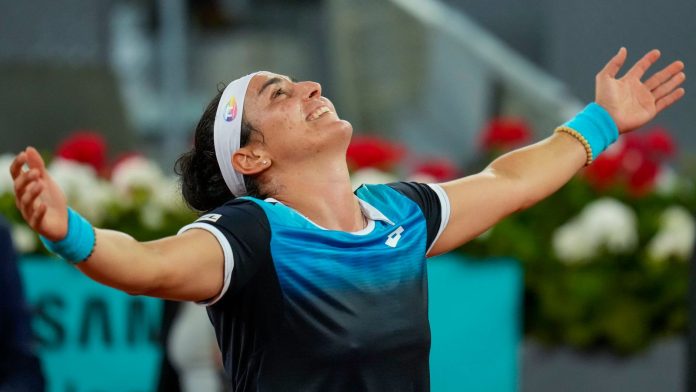 The Tunisian recovered from suffering a second-set bagel to claim her second career title in Madrid, which will see her rise to world No 7 in the WTA rankings

Ons Jabeur clinched the Madrid Open title with victory over Jessica Pegula in a rollercoaster clash, to become the first African player to win a WTA Masters 1000 event.

The two-time Grand Slam quarter-finalist overcame the American 7-5 0-6 6-2 in just under two hours to claim her second career title on Spanish soil.

Jabeur was forced to survive a set point in a gruelling opening set, before recovering from a second-set bagel to record the biggest victory of her career.

Pegula fended off a series of break points to establish an early 4-1 lead, but Jabeur’s aggressive approach paid dividends, as she claimed six of the final seven games to draw first blood.

The Tunisian unleashed a blistering backhand winner to survive a set point at 5-4 down, before breaking to love moments later, eventually wrapping up the opening set in 54 minutes.

Pegula responded emphatically however, racing to the second set without reply in just 26 minutes to force a decider.

The American halted Jabeur’s charge by saving three break points in her opening service game, and the world No 10 suddenly capitulated, making a host of unforced errors.

The pendulum continued to shift as the pair exchanged breaks early in set three, but Jabeur was the first to convert a precious hold, before coming through a decisive seventh game to claim a double-break and lead 5-2.

The 27-year-old then held her nerve to serve it out and complete an historic victory, which will see her rise to world No 7 next week.

Italy is voting and could have its first woman PM –...