Home Sport Mercedes bounce out of contention again? ‘We are a bit confused’ 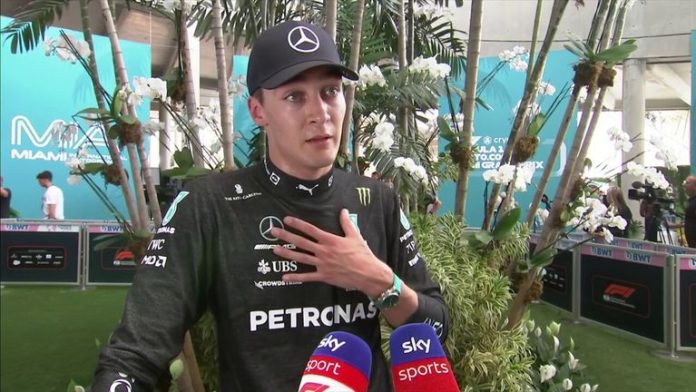 George Russell insisted the inconsistency of the Mercedes “is not making a lot of sense” as he qualified a lowly 12th for the inaugural Miami Grand Prix.

After a disappointing start to the 2022 season which has seen the constructors’ champions struggle to match the pace of Ferrari and Red Bull, Friday’s practice sessions had raised optimism for an improved performance and a reduction in the porpoising that has plagued their campaign to date.

Updates to the front wing helped Russell top the timesheets in second practice, but he couldn’t even match Friday’s best time in Qualifying and he struggled to explain why Saturday’s set-up caused so much more bouncing in his car.

“We are a bit confused to be honest,” he told Sky Sports. “My qualifying lap was slower than what I did yesterday in P2.

“The car felt completely different today, we were struggling with porpoising and we just couldn’t attack any of the corners.

“It is a real shame because there was the potential in there and yesterday we were quick. It has massively gone away from us today and I don’t really know why.

“It has just been a bit inconsistent to be honest.

“We thought we went pretty conservative with the set-up to make sure we avoided any porpoising but it seemed just as bad as we saw this morning in P3.

“It was going all the way through the corners in Turn 4 and Turn 5 so you just couldn’t attack into the braking zones so it is not making a lot of sense at the moment.

“When we get it into the window it is fast, but I am just a bit disappointed for myself and for the team, I think the potential is there.

“Yesterday we were in the fight for pole and today we qualified P12 which is the worst qualifying of the year, so it doesn’t make a lot of sense.”

Hamilton: Eventually we will get there

Lewis Hamilton was only 15th in Saturday’s final practice session, but recovered to qualify in sixth for Sunday’s race, which is live on Sky Sports F1 at 8.30pm.

But while performance has improved, Hamilton feels his Mercedes is still as far behind Red Bull and Ferrari as it was at the start of the season.

He said: “It was a much, much better qualifying session than I’ve had for the last three races, so I’m grateful for that to be honest and I’ll take it.

“We’ll keep on chipping away, keep working at it. So much amazing work is going on in the background and everyone is working so hard. Unfortunately, I don’t think we are necessarily moving forwards at the rate we would like to.

“That gap is similar to the beginning of the year, I think. We have just got to keep our heads down, keep working, keep focused and keep trundling.

“Eventually we will get there.

“It’s not felt generally better this weekend, but today once I got the tyres in a better place it was feeling a little better in qualifying.

Wolff: We worsened the car

Mercedes team principal Toto Wolff said tweaks made to the car overnight ultimately made it worse, but that “experiments” are helping the team to understand the cause of the porpoising.

“We have seen a performing car yesterday in P2 that was real,” he told Sky Sports.

“We were able to put it in a sweet spot and today in P3 we were completely off with the experiments we did.

“It creeped a little bit off but it was still bouncing like a kangaroo, the drivers are not happy with it and you can see that is the reason we are off.

“We definitely have a better handling on what works and the slump today from yesterday helped.

“It is never one thing that is responsible for performance and non-performance but we had a good car yesterday afternoon, then we worsened it.

“Some things we understand, others not.”