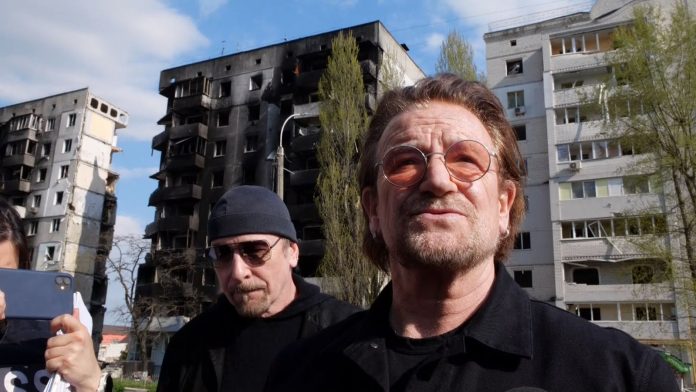 Bono has said he trusts young Russians to throw President Putin out of office on a visit to a war-ravaged town in Ukraine after a surprise gig in Kyiv.

In an apparent reference to Putin, who has claimed he invaded Ukraine to “de-nazify” the country, the U2 frontman said the conflict was “one man’s war really”.

Speaking in Borodyanka, a town left shattered after weeks of occupation by the Russians, Bono told Sky News’s Mark Austin: “You can’t ever really have a sense of what these people have been through”, even though the evidence around was “stark”.

Asked how he felt, Bono said: “I’m not sure words can fully express what they’ve been through.”

Earlier in the day, Sunday Bloody Sunday had roared through a metro station in Kyiv as Bono and the Edge performed in a “show of solidarity” with Ukraine.

The rockstars sang the U2 classic, a track about the Troubles in Northern Ireland from their 1983 album War, as well as With Or Without You and Angel of Harlem.

Speaking in front of the blackened ruins of an apartment building in Borodyanka, Bono said: “The story I wanted to tell today… is how many Ukrainians died fighting fascism, fighting the Nazis: nearly eight million.

“And then to be called fascists is just ridiculous.”

The singer said he ‘trusted in the younger people of Russia’ to throw Vladimir Putin out of office.

The Irish frontman said they had been invited to perform in Kyiv by the Ukrainian president, Volodymyr Zelenskyy, himself.

The band had met Mr Zelenskyy before he became president, and when war broke out they sent a him a recording of a poem set to music, Bono said.

The president then invited them to perform and asked them to “please go around the country, hear stories”.

The Edge, standing alongside Bono outside the Ukrainian capital, told reporters: “Musicians and poets and writers do have a part to play. We work with our music and our words.

“We’re not politicians. But we can speak to the horror of what we’re standing in the midst of, and just say ‘it’s wrong’.

“So we’re here to bear witness to it.”

During the earlier performance, the small audience clapped along as Bono and the Edge performed Ben E King’s Stand By Me, changing some of the lyrics to “Stand by Ukraine”.

They were joined at the Khreschatyk metro station by the Ukrainian singer Taras Topolia.

Bono told the crowd: “The people in Ukraine are not just fighting for your own freedom, you are fighting for all of us who love freedom.”

In 2005 the band won an Amnesty International Ambassador Of Conscience Award for linking music with the struggle for human rights.