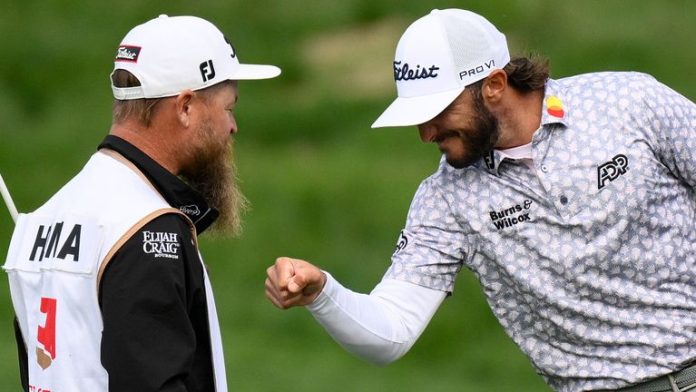 McIlroy, a three-time winner of the event, finished fifth at TPC Potomac and four strokes behind winner Max Homa; England’s Matt Fitzpatrick claimed a share of second with Keegan Bradley and Cameron Young

Rory McIlroy believes he is heading into the PGA Championship with his game in good shape after an encouraging finish to his title defence at the Wells Fargo Championship.

McIlroy stuttered through to the weekend on the cut mark at TPC Potomac, his first event since a runner-up finish at The Masters last month, before back-to-back 68s over the final two days saw him post a top-five finish.

The former world No 1 briefly threatened a first win of the year as he mixed four birdies with two bogeys during the final day in Maryland, with McIlroy ending the week four strokes behind winner Max Homa.

“It was a solid day, played well,” McIlroy said. “Had my chances, played the last eight holes in one over, which whenever you give yourself a chance and got within three is obviously not the way you want to finish.

“Some of those pin positions on the back nine were tricky and tough to get close to. Yeah, I mean, overall it has been a good weekend, a decent week, something to build on going into the PGA [Championship].

“I’m playing good, playing really good. No complaints with the game. Everything feels pretty solid. As I said, just a couple things here and there coming down the stretch, a couple missed putts, but really apart from that I feel like the game is in good shape.”

Homa secured a second victory of the season and fourth PGA Tour title after coming through a final-round tussle with Keegan Bradley to claim a two-stroke victory, with Bradley having to settle for a share of second alongside Cameron Young and England’s Matt Fitzpatrick.

Fitzpatrick’s runner-up finish is his fifth top-10 in nine starts on the PGA Tour so far this year, with the 27-year-old believing he has lacked luck in his search for a maiden PGA Tour victory.

“I’m delighted with the week,” Fitzpatrick told Sky Sports. “I knew this golf course was going to suit me before I came and it has done exactly that. I really enjoyed it. It’s a brilliant golf course and happy to play well.

“At the end of the day, to win out here, I think you’ve got to play very solid for all four days, but you’ve got to have a lot of luck as well. I look at some of the rounds I’ve had this year and I’ve just got nothing, I really haven’t got much at all.

“I think if I keep doing what I’m doing it [a PGA Tour win] will come. You look at a couple of occasions yesterday where I just didn’t get away with things and maybe once or twice today as well. It’s there or thereabouts, but just got to sharpen up and we’ll see.”

The PGA Championship takes place from May 19-22 at Southern Hills Golf Club in Tulsa, Oklahoma, with extended coverage live on Sky Sports. Watch live on Thursday May 19 from 1pm on Sky Sports Golf!

Rodgers: Packers game in London ‘a dream’ | ‘I wanted to go early’

Niecy Nash’s wife has the wrong name tattooed on her neck...