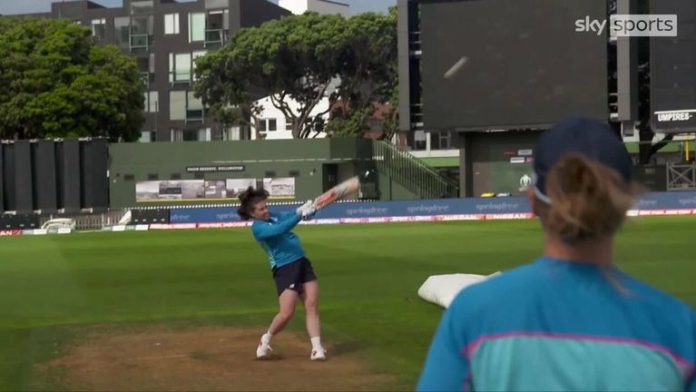 England opener Tammy Beaumont on how women’s cricket can continue to rise, why Australia are such a dominant force, Test cricket, if Anya Shrubsole’s retirement made her consider her own future and the “really cool opportunity” provided by this summer’s Commonwealth Games in Birmingham

Tammy Beaumont is adamant women’s cricket in England can continue its upward trajectory – if more funds are ploughed into the sport and comparisons with the men’s game come to an end.

Research by The Women’s Sports Trust shows a record 15.1 million people watched women’s sport in the first three months of 2022, with the Cricket World Cup earning 13 per cent of that share.

Former England batter Ebony Rainford-Brent said women’s sport in the UK is “at the highest point it has ever been” when she collected her MBE at Windsor Castle earlier this month.

Beaumont agrees – but says there is still work to be done for cricket.

The 31-year-old, part of the England side that recovered from three straight defeats at the start of the recent World Cup to make the final, told Sky Sports: “The game can definitely still go higher.

“The biggest thing that sometimes holds it back is the comparison to the men’s game – people saying ‘women don’t bowl 90mph, don’t hit sixes, don’t hit the ball as hard’. It can kill the game.

“But it doesn’t help if people say, ‘she wouldn’t do very well against Jofra Archer, would she?’ Those sorts of things really aren’t helpful.”

‘We can catch Australia – but need more full-time players’

England lost to Australia by 71 runs in April’s World Cup final in New Zealand, with Alyssa Healy’s 170 from 138 balls underpinning the Southern Stars’ 38th victory in their last 39 one-day internationals.

Australia have also won the last two T20 World Cups, in 2018 and 2020, while they defeated England 12-4 on points earlier this year to retain the Women’s Ashes. So, how can the gap be bridged?

Beaumont said: “One of the reasons Australia are so good is that they have got 90-plus full-time professional cricketers that genuinely do not have to do anything else to make money other than play cricket 12 months a year.

“Over here, there are just under 20 England players that can do that but teams in our domestic regional structure have only got about six players each getting paid full-time.

“It is obviously great to see the pay rises in The Hundred but that is only for a small part of the year. The rest of the time, a lot of these players are having to work, coach or whatever to get by.

“It has to get to the point where your whole squad is professional and can train full-time. That will improve the standard and competition for places.

“That then creates an environment where you have to be pushing on and getting better. If you don’t have that competition, things can stagnate, the team might not move forward and you can get caught out.

“Australia had some pretty big injuries this winter but still managed to put a really competitive XI on the park. They are ahead of us but I don’t think the gap is too wide. I think we can catch them.”

England challenged Australia at points this winter without picking up a victory, most notably during a pulsating conclusion to the Ashes Test match in Canberra.

Having been set 257 from 48 overs to win on the fourth and final day, England were closing in on victory when they required 45 runs from 60 deliveries with seven wickets in hand.

However, a collapse of six wickets for 26 runs swung momentum back Australia’s way before the tourists clung on for a draw.

Beaumont said: “Growing up I really wanted to play in Ashes Tests – it was the biggest goal for me as a young girl. The last couple of years we have played more than ever but still not enough.

“The argument that women’s Tests aren’t very exciting – well, the last two we have played, against India in Bristol last year and now Australia, have been really competitive, really exciting.

“The more we play, the better we get, the less boring it is. As players we want to play more and I think results would make it more interesting which is why we want it to be five days.”

I knew she was thinking about a while ago but it is still pretty gutting. It did pull on the heartstrings and I had a good cry when she confirmed it. You always knew what you were getting with Anya – she was reliable and would put in solid performances day in, day out. She has so much knowledge she is willing to share with anyone and is a calm, calculated character who thinks logically.

Beaumont not ready to ‘hang up boots’

England’s Ashes reverse means it is now eight years since they last won the trophy, with the previous four series ending in three Australia victories and a draw.

They will get the chance to snap that run at home in the summer of 2023, when Beaumont could still be a linchpin of the side.

The opener wants to carry on playing “for a fair bit longer” – but admitted the recent international retirement of Anya Shrubsole, nine months her junior, did give her pause for thought.

Beaumont, who has scored over 5,000 international runs for England, said: “Whenever someone of a similar age to you retires, I think it does start to make you think about your future.

“Most of what I do as a cricketer is based around the World Cup cycle so with the 50-over World Cup coming to an end, it does give you a bit of time to reflect on your goals, how much longer you are going to do it and life after cricket.

“There has been a bit of thought in my mind but for now, I plan to continue for a fair bit longer. There is quite a lot of exciting stuff coming up, even in the next 12 months. I don’t think there is much point in hanging up the boots just yet.”

One event firmly on Beaumont’s radar is the Commonwealth Games in Birmingham this summer, with women’s cricket included for the first time.

Hosts England will be joined in an eight-team T20 tournament by Australia, India, New Zealand, South Africa, Pakistan, Barbados and Sri Lanka with all games played at Edgbaston.

Beaumont added: “It is going to be amazing to play in front of a home crowd and being the first to play women’s cricket in the Commonwealth Games is such an exciting thing to be a part of.

“As a genuine sports fan, I always tune into the Olympic and Commonwealth Games and to think we are going to be part of such a festival atmosphere is great.

“One of my best mates is GB weightlifter Zoe Smith and the stories she tells make me desperately want to be involved.

“On the days we are not playing cricket, we will hopefully get to watch swimming, track and field or whatever and get behind a team that is not just cricket. It will be a really cool opportunity.”