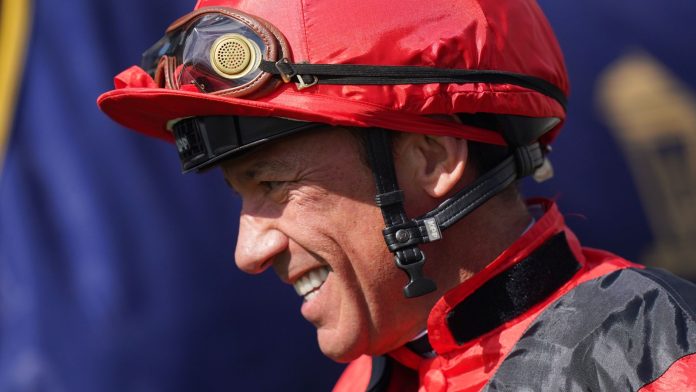 Emily Upjohn was a runaway winner of the Group Three Tattersalls Musidora Stakes for Frankie Dettori and John and Thady Gosden.

The filly pulled hard in the first half of the race and was heavily restrained by Dettori until two furlongs from home, when she was allowed to go forward and pass the race leader.

The daughter of Sea The Stars then accelerated away from her four rivals, crossing the line five and a half lengths ahead of Life Of Dreams as the 4/7 favourite.

Prior to the race Emily Upjohn was a 7/2 chance for the Cazoo Oaks and was cut to 11/8 favourite (Sky Bet) following the success.

Gosden said: “It’s interesting that Frankie said the ground was quite tiring after the little bit of rain they’ve had on it. A few of them were struggling four or five out.

“Frankie waited to go and she’s picked up well and looked like a mile and a half would be right up her alley. She couldn’t have done it any better really.

While the Clarehaven handler is confident in Emily Upjohn’s ability to handle the undulations of Epsom, he plans to give her a pre-race visit to the track for the Cazoo Derby Gallops Morning on May 23.

He added: “She’s very well balanced, but there’s no reason we won’t get some sausage and bacon on the breakfast morning at Epsom. We can have a canter round the track there to see how she handles it.

“She’s a lovely filly and well balanced with a good stride and she’s learnt a lot today.”

Comparing Emily Upjohn to his 2012 Musidora winner The Fugue, Gosden added: “She’s in that class. The Fugue was extremely unlucky in the Oaks [finished third] as she got knocked over – the less said about that the better.

“With every race this filly is improving, we’ve liked her since day one and I’m delighted – we can sleep nicely tonight!”

“I would say this filly is in that class. The Fugue was a mile-and-a-quarter filly, but this filly wants a mile-and-a-half. We’ve been lucky to win the Oaks three times and she very much deserves to be in that league.”

Dettori said: “She was keen early on, but she’s in control and you want her like that. The ground is a lot deeper than you guys think. Everybody was struggling from four furlongs out and I kept her together and from two-and-a-half to the winning post, I didn’t see another horse.

“She won in good style by five and a half lengths – what more do you want? We never had any worries about staying a mile and a half.”

Dettori ranks Emily Upjohn favourably among his previous Oaks winners, adding: “She’s getting there. Enable won at Chester and at this stage she was probably on the same par.

“With every race this filly is improving, we’ve liked her since day one and I’m delighted – we can sleep nicely tonight!”

Alex Merriam, Charlie Appleby’s assistant, trainer of the runner-up, said: “We were pleased, that was only her second run and I think she’s run into a very nice horse.

“We’ll see how she is and hope things go to plan. The Oaks might still be a possibility but I haven’t spoken to Charlie yet.

“She’d either run there or the Ribblesdale, I’d let Charlie speak to His Highness [Sheikh Mohammed] and we’ll see how we go.”

David Simcock, trainer of the third, Ching Shih, said: “Obviously the winner is pretty smart, it doesn’t take a genius to work that out.

“I said before the race they were just five novice winners and they were all in the same boat.

“The winner looks exceptional but our filly has acquitted herself well. She was the only one out of the first four not to have had a run and she’ll come forward for it.

“I think when she gets her mother’s (Madame Chiang) ground [soft] she’ll improve for it as it will actually make her quicker, if that doesn’t sound stupid.

“I don’t know where she will go but it won’t be Epsom – unless the winner scares everything off.”