Home Sport Hardaker has made ‘very good progress’ since seizure 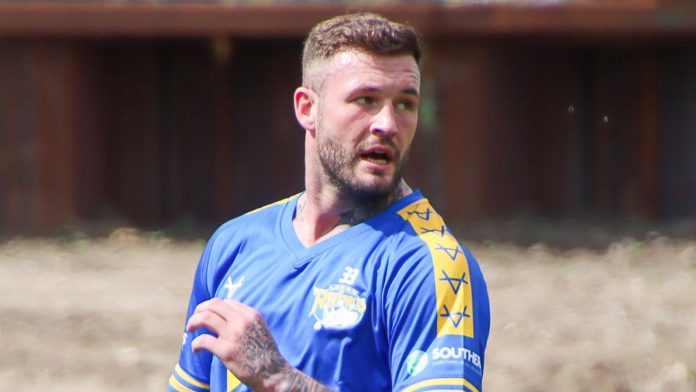 “Zak has had a very good progression over the last week or so following the medical advice and he got through a good session yesterday. He needs to get through another session tomorrow and have another assessment from the doctor and could well be available for selection” – Rohan Smith

Zak Hardaker has come through his medical tests with “flying colours” and will go straight into the Leeds team to play Salford on Sunday if he gets the final all-clear from doctors, according to new coach Rohan Smith.

The 30-year-old England full-back was this week cleared to resume training after suffering a suspected seizure while out walking with his young son a fortnight ago and came through a rigorous session on Tuesday.

Smith, speaking at his first preview press conference via Zoom, said: “Zak has had a very good progression over the last week or so following the medical advice and he got through a good session yesterday.

“He needs to get through another session tomorrow and have another assessment from the doctor and then he could well be available for selection.

“If he’s available, he’ll be selected.”

Hardaker, who last played for Leeds in 2017, re-joined the club from Wigan and was set to make his return in the Rhinos’ last match against Hull KR 12 days ago until suffering his setback.

Smith added: “I’m not sure of the medical tests that he’s done specifically other than he’s passed everything he’s had to.

“He’s got through each session as planned and the medical team and strength and conditioning team are happy with the way he’s gone. He’s performed well at practice and looks like he’s getting very close to playing.

“The staff are monitoring any symptoms and checking there’s no adverse affects to the exercise. Because it is such a staged progression it is predictable, he’s come through with flying colours at this point.

“He’s certainly in decent condition. I’ve long believed that, for players who have played so many games, it’s kind of built in there to a certain point.

“We won’t expect him to be in absolute prime condition because he hasn’t played much in the last period of time, but he’s a veteran and he knows how to play. He’s super excited to be playing when he’s fit and available.”

Smith, who arrived a week ago to take up a three-and-a-half-year contract as the successor to Richard Agar, is also hoping to have several other players back, including utility back Richard Myler, for the visit to the AJ Bell Stadium.

That could leave him with a tricky selection dilemma, with Hardaker and Myler both vying for the full-back role.

Smith says he has taken soundings from his coaching staff and has come up with a “collaborative approach to this week’s game”.

“I’ve spoken to the guys about what the teams needs on a weekly basis,” he said. “They play multiple positions that can help the team.”