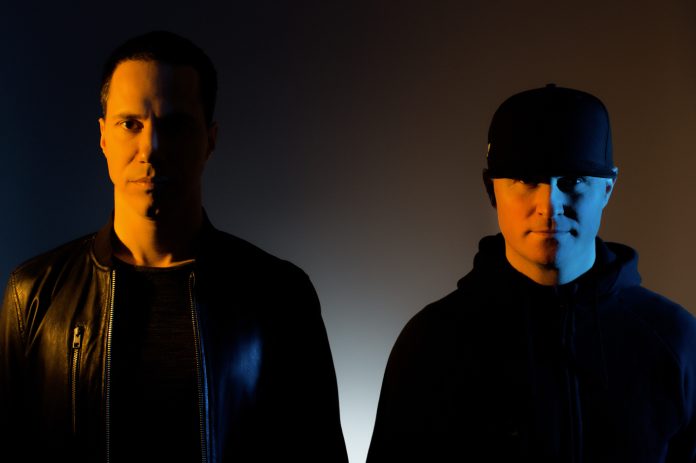 After an inordinate and almost brutal amount of teasing (the first track came out in 2019), a couple of interstitial tracks on ProgRAM and Break’s Symmetry Recordings imprint and one final delay after the listening party last month, Calyx & Teebee’s nod to dubplate culture, Plates, will finally be out this week. Always intended to be “leaked,” as it were, over the course of multiple singles, this biggest-Calyx-and-Teebee-multitrack-since-the-last-one hits in both digital and its own vinyl “plate” (not acetate) format on Friday, May 13 on, what else, RAM.

With nine of the 12 tracks on Plates already out, one might thing there’s not much left to discover of this LP but one would be wrong. The time an attention D&B’s dynamic duo put into crafting each track really does prove that, as in dubplate days of yore, every one of them deserves its time under the lights and on a big rig. From the ameny dark dub throwback style of “War Dub” to the jazzy snares of “The Fog” to the lyrical crooked-eyebrow-at-social-media of “Anything for Attention” to the big sound of, well, “Big Sound,” Plates is a history lesson, a commentary and a hopeful look forward at the best parts of our scene.

Our YEDM premiere is one of the last and best-kept secrets of Plates and a testament to how expertly crafted D&B can be. “Dial Up” is also classic Calyx & Teebee up and down the staff. With its grimy, grinding synth line, its unconventional yet no less impactful drops, surprisingly melodic intro and break, actual barking vox punches and highly styled drumline, this is one of those “plates” that’s kept Calyx & Teebee packing dancefloors and punters complaining of whiplash lo these 25 years. You can almost smell the acetate coming off this one, as at the same time it reads modern and innovative for the digital generation.

It may be strange to think of Plates as seminal or career-defining since this duo have such a long and genre-defining career already. If anything, Calyx & Teebee are seminal to drum & bass itself. That said, it sort of is a big milestone. Traversing decades of sound, prevailing with regular track drops through a pandemic and reminding fans and artists about the core of the movement, all whilst not being able to tour and play all these “plates” in their intended venues, this LP is at the very least a reminder that D&B and, if you want to get puffed up about it, music as a whole, will always prevail do bring us sound, emotion and bass.

Plates releases on RAM Records this Friday, May 13. Click here to pre-order or pre-save and keep an eye out for the limited signed vinyl edition.

Niecy Nash’s wife has the wrong name tattooed on her neck...