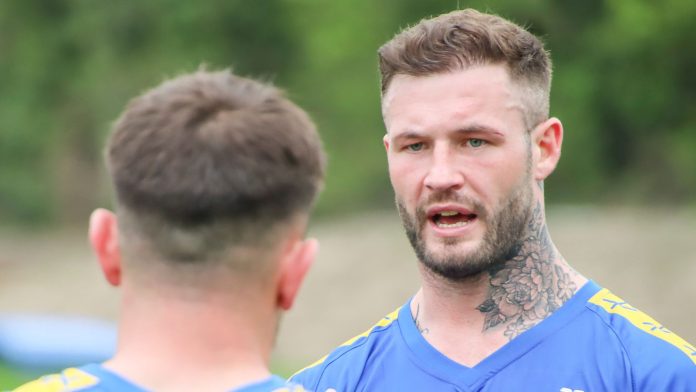 “I’ve been all over the shop and not 100 per cent healthy. But all the tests have come back really positive. I had a couple of scans, the MRI being the main one. I’ve just done the stages of training and loading. I’m pretty good. I’ve come out the other side.” – Zak Hardaker

Zak Hardaker believes stress may have caused his recent seizure but insists he is fully recovered and ready to begin his second stint with Leeds this weekend.

The 30-year-old England international re-joined the Rhinos as a free agent following his release by Wigan, and was set to face Hull KR a fortnight ago until he collapsed in the street while out walking with his 18-month-old son, Abel, near his Pontefract home.

Hardaker has since come through a stringent and extensive return-to-play protocol, and new Leeds coach Rohan Smith has said he will be selected for Sunday’s Super League game at Salford providing he gets the final all-clear from the club’s medical staff.

“I’ve been to see the neurologist and been to see about my heart,” Hardaker said at his first press conference on zoom since his signing. “I’m really good. The doctor said I’m pretty fit.

“They do think the fit or seizure happened from the impact of me falling down on the pavement. If I’d landed on grass would it be different? I don’t know.

“It’s just one of those things. I think you can maybe put it down to stress. I have had a lot going on for the last three or four weeks regarding Wigan, then coming home.

“I think I’ve been a bit all over the shop and not been 100 per cent healthy. But all the tests have come back really positive. They found a brain to begin with so that was a start.

“I had a couple of scans, the MRI being the main one where they could delve in and see the four different parts of the brain.

“I’ve just done the stages of training and loading. I’m pretty good. I’ve come out the other side.”

Hardaker spoke of his concern for his son at the time of his fall and says he will be forever grateful to the paramedic who came to his aid.

“It was really scary,” he said. “I was fortunate for it to happen about two minutes away from my house but even more fortunate that it happened outside the house of a paramedic who came out and looked after me.

“She is called Rosie. She stayed with me and was terrific. I have been speaking to her since.

“I think I’d have to go to her house every week with flowers for the rest of the year to show that because I don’t think I can put into words how grateful I am, especially for my son.

“I’m OK but it could have been a different matter if no one was there and my son got off his tricycle and toddled off somewhere. I would have found that hard to deal with.”

Hardaker sought a move from Wigan during the winter to be close to his partner Elisha, who is expecting their second child in August, and is delighted to be reunited with his old club, with whom he won three Super League titles and twice won the Challenge Cup.

“It feels a little strange, if I’m honest,” he said. “Putting on Rhinos colours was a weird feeling and then getting little flashbacks driving down Kirkstall Road where they train.

“It was a trip down Memory Lane. There’s a few old faces still here and a lot of new faces. I’m really happy. There’s a good buzz around the place. It’s so good to be back.”

Hardaker is content with a short-term contract but is determined to press his claims for a World Cup place, having missed out in both 2013 and 2017 due to off-field matters.

“I am not going to look too far ahead,” he said. “The deal is until the end of the year. I am really happy with that.

“I’ve got to try and play well to earn a contract and then Leeds benefit from that from me playing well.”

Meanwhile, Hardaker says he holds no grudges against Wigan, whose coach Matt Peet claimed he fell below the club’s standards off the field and failed to learn from his mistakes.

Hardaker insists he “did nothing wrong” at Wigan, adding: “How it ended probably wasn’t the best.

“I’m pretty happy and it is what it is and Wigan have moved on. It was great for them to get to the Challenge Cup final and I’m really happy for the boys there.

“I still speak to them and have no bad feelings towards the club, players or staff.”