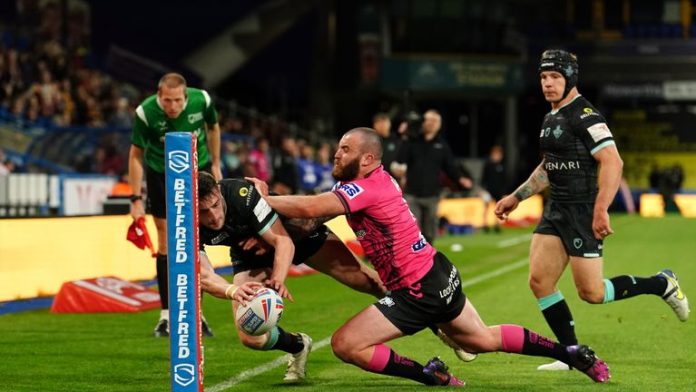 Wing Louis Senior scored a hat-trick as Huddersfield struck a psychological blow ahead of the Challenge Cup final against Wigan by beating their final opponents 32-22 in Super League at the John Smith’s Stadium.

Ian Watson’s Giants held off a second-half fightback highlighted by two tries from Wigan’s teenage debutant Matty Nicholson to secure a seventh win of the season and climb back into the top four, denying their opponents the chance to leapfrog St Helens into top spot.

The Round 12 match was billed as a dress rehearsal for the showdown at the Tottenham Hotspur Stadium in a fortnight’s time, but the finalists were without 15 players between them from Saturday’s semi-finals so neither coach will read much into this result.

The outcome illustrated Huddersfield’s greater strength in depth, although architect of their impressive victory was experienced Tongan international Tui Lolohea, who has discovered the form of his life following his switch to full-back.

Wigan coach Matt Peet, who rested seven members of his semi-final team, handed Super League bows to stand-off Logan Astley, who showed some nice touches a week before his 19th birthday, and loose forward Nicholson, another 18-year academy product who will long remember his debut.

Twenty-year-old winger Sam Halsall also seized his opportunity with two tries but the Giants largely kept a tight rein on Bevan French, who got the chance to play in his favourite full-back role in the absence of a rested Jai Field.

Huddersfield made a breathtaking start with Lolohea and scrum-half Theo Fages pulling the strings.

They came up with a set scrum move honed on the practice pitch to get Senior over for a sixth-minute try, which Oliver Russell converted.

Senior crossed again from a similar move four minutes later but he was denied by a superb cover tackle from French, and the Giants missed another glorious chance when Russell spilled the final pass from Lolohea after centre Ricky Leutele had cut the Wigan defence open.

Leutele, who is out of contract this year, showed his class again after 26 minutes when he gathered Jack Ashworth’s pass out of the tackle and powered his way over from 10 metres out, taking three defenders over the line with him.

The try came while the Giants were a man short with former Wigan forward Joe Greenwood in the sin bin for obstructing French as he chased his own kick on the last tackle.

That followed a break out of his own half by Halsall, who gained some reward for his efforts nine minutes before half-time when he supported a break by French, who after being ankle-tapped by Lolohea had the presence of mind to make the ball available as he fell to the ground.

Harry Smith’s conversion made it 12-6 at half-time but it took Huddersfield just three minutes of the second half to re-establish their 12-point cushion, thanks again to the outstanding Lolohea.

His grubber kick on the last tackle rebounded fortuitously in his hands off a Wigan defender and his instinctive cut-out pass enabled Senior to cross for his second try.

Russell added the touchline goal and there looked to be no way back for the visitors when Lolohea got centre Jake Wardle for Huddersfield’s fourth try after 52 minutes.

However, Wigan created an overlap on the hour for Halsall to score his second try and two minutes later winger Abbas Miski burst through to get the supporting Nicholson over, which cut the deficit to just six points.

Huddersfield finally looked to have made the game safe when second rower Sam Hewitt touched down Fages’ grubber kick for their fifth try, but Wigan kept their hopes alive when Nicholson took Brad O’Neill’s pass out of the tackle to score his second try.

The action continued right to the final whistle as Senior completed his hat-trick with seconds to spare and Russell kicked his fourth goal from six attempts.

President Biden: ‘First time since the Cuban missile crisis, we have...