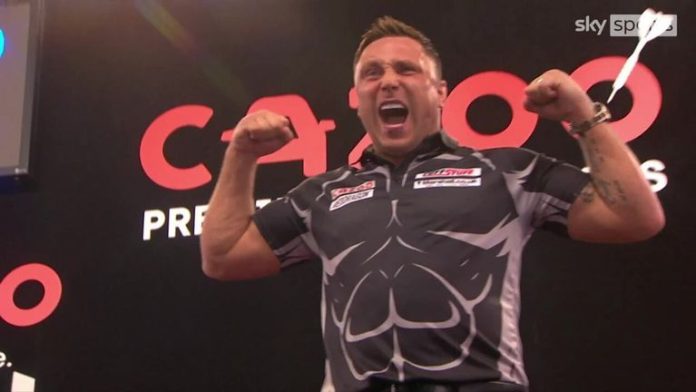 Gerwyn Price went on to win at the Utilita Arena in Sheffield; Price’s victory means that he is still in contention for a top-four finish; Michael van Gerwen secured his spot at Playoff Night in Berlin despite losing to the Iceman in the final

Price threw with purpose, ending Gary Anderson’s hopes of a playoff spot in a 6-4 quarter-final before a clinical break of throw allowed him to take charge and beat Joe Cullen 6-3 in the opening semi-final.

The final saw Van Gerwen break Price’s throw in the opening leg, the Green Machine then powering into a 3-1 lead.

However, a pivotal 161 from the Welshman helped bring the leg back to 4-4, Van Gerwen missing four darts at the D12 finish to give Price a chance to fight back.

It was then a nervous final leg showdown but Price managed to hold his throw, take out 128 followed by 56 to seal his second victory of the Premier League calendar and beat the Dutchman 6-5.

The win puts pressure on Peter Wright in fourth spot, and Price is in the mindset that he can go on and secure a playoff spot in the next few crucial weeks.

“I don’t think I was at my best today but I know the last couple of weeks I have been under the cosh and not playing well,” said Price.

“I am happy with the win today and I am in with a shout next week and the week after so that is all that matters.

“I know if I go and win next week then I am back in the playoffs.

“It doesn’t matter if I am one, two three or four – as long as I am there I am happy.

“When you are not playing well and things aren’t going to plan then things don’t happen for you and you can’t be yourself.

“Things sort of happened for me at times in games and the reactions come but I don’t do it on purpose.

“People think I do it on purpose but if I am playing rubbish then it doesn’t happen but at crucial times it then comes out.

“I am under a lot of pressure, I think I need to win two out of the last three and I have done one and got one more to go.

“I have been under the cosh the past couple of weeks so it is a big pat on the back.”

After a clinical start from Price against Gary Anderson in their quarter-final, hitting a ton-plus finish and breaking the Scotsman’s throw, Anderson mounted a mid-match fightback.

However, the Welshman managed to hang on by holding his throw, winning 6-4 and picking up some key points.

He then had to face Joe Cullen, who had been awarded a bye to the semi-final after James Wade had to pull out through illness.

The pivotal moment came as Price hit 111 to break the Rockstar’s throw, before consistently finding the maximum to break Cullen once again and cement his spot in the final.

After breezing past Wright in the quarter-final, seeing off the Scotsman in a 6-1 win, Van Gerwen was faced with the tougher test of Smith in the semi-final.

After beating table-topper Jonny Clayton in a dramatic final leg shootout, Smith then took Van Gerwen all the way in what was a sloppy performance for the Dutchman.

However, a late fightback of four legs in a row gave the Green Machine the throw for the match, which he took out despite averaging under 90, to see himself through to face Price and secure his place at Playoff Night in Berlin.

Next week, Premier League Darts heads to the capital, live from The O2, where Gerwyn Price takes on Jonny Clayton, Michael Smith is up against Michael van Gerwen, James Wade could be back in action against Peter Wright and Joe Cullen faces Gary Anderson.

Check out daily Darts news on skysports.com/darts, our app for mobile devices and our Twitter account @skysportsdarts. We’re back for more Premier League action from The O2 in London on Thursday, May 19 – live on Sky Sports Main Event & Sky Sports Action from 7pm.

Everybody knew the accusations about R Kelly – so why did...