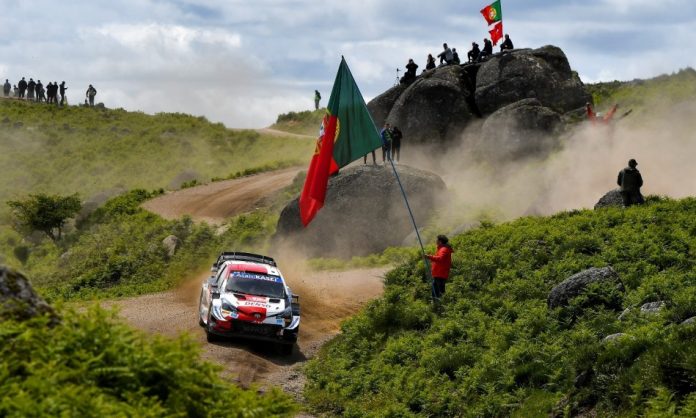 With 2022 marking the WRC’s 50th season, the 55th Rally de Portugal has been selected as the centrepiece of the half-century celebrations when several stars – and their cars – from yesteryear will be on show.

Several cars that have become part of WRC folklore will be on display and will feature in demonstration runs.

As well as reflecting on the championship’s glorious past, the event shines a spotlight on the hybrid-based Rally1 regulations that were introduced at the start of the year and point to an exciting and sustainable future for the WRC.

A record 12 Rally1 cars are set to take the start next Thursday evening as the WRC switches to gravel for the first of five loose-surface events in succession.

Loeb, a winner of the FIA World Rally Championship on nine occasions, and eight-time world champion Ogier, are due to make their second appearances of the campaign for M-Sport Ford World Rally Team and Toyota Gazoo Racing WRT respectively as part of their partial 2022 programmes.

While both have limited experience on gravel in new-generation Rally1 machinery, their pace is not in doubt judging by their spectacular battle for victory on Rallye Monte-Carlo in January, which Loeb edged by 10.5s over his compatriot. They will also benefit from lower starting positions, which in the event of dry conditions, should hand them more stable and consistent grip levels on leg one.

Victory for Ogier would make him the most successful driver in Rally de Portugal history as a six-time winner, a result that would extend his total WRC triumphs to 55. Loeb has 80 wins to his name.

A founding round of the WRC back in 1973, Rally de Portugal is ranked as one of world rallying’s classic events with challenging stages, varying road surfaces and changeable weather adding to the task facing crews. It’s also extremely popular among fans with enthusiastic spectators following the action in their tens of thousands.

Official supplier Pirelli provides its Scorpion KX hard and soft tyres. The hard compound is the first choice and is designed for warm and dry weather, while the soft compound is for cool and damp conditions. Teams can use a maximum of 36 tyres for the event including four during Thursday’s Shakedown.

More Rally1 cars than ever before will line up for Rally de Portugal with 12 of the WRC’s latest-generation, top-tier machines appearing on the entry list.

Finns Kalle Rovanperä/Jonne Halttunen head the provisional championship standings after back-to-back wins in Sweden and Croatia and are therefore top seeds for the event in their Toyota GR Yaris Rally1. They are joined in the Toyota Gazoo Racing WRT line-up by Elfyn Evans/Scott Martin from Great Britain and reigning world champion Sébastien Ogier, who makes his second start of the season with Benjamin Veillas co-driving.

Spaniards Dani Sordo and Cándido Carrera make their first start of 2022 for the Hyundai Shell Mobis World Rally Team as part of their carsharing arrangement with Oliver Solberg/Elliott Edmondson, who switch to a Hyundai i20 N Rally2 in WRC2. Belgian pair Thierry Neuville/Martijn Wydaeghe and Estonian former world champions Ott Tänak/Martin Järveoja will also fly the Hyundai flag in the Rally1 category.

The category for Rally2 cars has been restructured for 2022 with separate classifications for Teams, Drivers and Co-Drivers, plus Junior Drivers and Junior Co-Drivers. The Masters Cup rewards the best Driver and Co-Driver born on or before January 1, 1972.

There’s no such thing as a slow start on the 55th Rally de Portugal. Following the ceremonial start in Coimbra, the city’s outskirts are the setting for an all-new 2.82-kilometre superspecial stage from 19:03 hrs on Thursday May 19. A route to the south of the rally base, Matosinhos, forms Friday’s action. The Lousã, Góis and Arganil stages are used twice before the day ends with a run through the Mortágua stage and a head-to-head superspecial at the Lousada rallycross track. The bulk of Saturday’s action is centred on the Cabreira Mountains northeast of Matosinhos. There’s a gruelling 164.98 competitive kilometres in store with the 37.24-kilometre double-use Amarante test the rally’s longest. Vieira do Minho and Cabeceiras de Basto are also run twice during the day. Saturday’s itinerary is completed by a street stage in the coastal town of Porto Foz. Sunday begins with visits to Felgueiras and Montim before attention turns to the Fafe test and the legendary Pedra Sentada jump. The 11.18-kilometre stage, known locally as Lameirinha, is used twice either side of a second visit to Felgueiras. Fafe also hosts the event-deciding Wolf Power Stage from 12:18 hrs local time.

The Media Centre, also located within the Exponor, is open as follows:

Aside of the WRC event, title-winning drivers, co-drivers and team managers will honour the WRC’s 50th season in Matosinhos during five days of celebrations at Rally Portugal.

All priority drivers (and co-drivers upon request) will be available for media interviews at the following times:

• Protective face coverings must be worn by media personnel at all times and there will be a separation between the WRC drivers/co-drivers or team principals (Zone 1) and the media personnel (Zone 2).

• Tabard media are permitted in Zone 2 of the Media Zone.

• Microphones/recording equipment on extension poles or in fixed positions near the drivers/team principals must be used together with disposable microphone covers or recording equipment that can be sanitized after every single interview.

Representative of the winning manufacturer

The classification following round three of the 2022 FIA World Rally Championship season is available at this link: https://www.fia.com/events/world-rally-championship/season-2022/standings