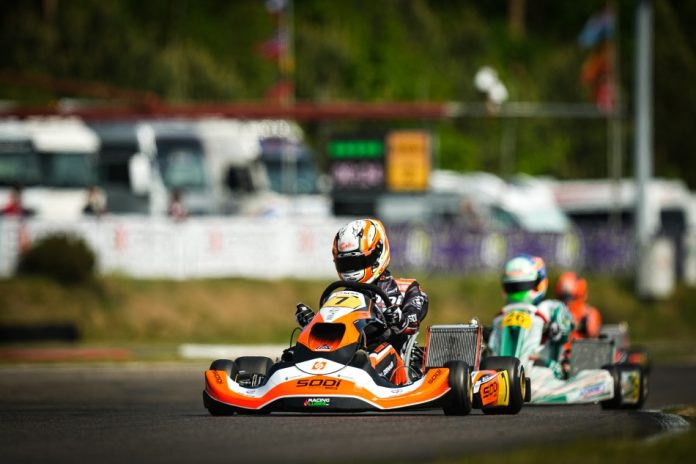 The first round of the FIA Karting European Championship – KZ & KZ2, as well as the FIA Karting Academy Trophy, benefited from ideal conditions during Qualifying Practice on the afternoon of Friday 13th May in Belgium. Sunny skies and a pleasant temperature close to 20° made for a high quality and very sporting confrontation on the Genk circuit. David Trefilov (DEU) in KZ2, Guillaume Bouzar (LUX) in Academy and Emilien Denner (FRA) in KZ managed their sessions perfectly to take the three pole positions of the day.

There were few defections from the entry list and the field for this FIA Karting event was substantial, with the presence of 54 different nationalities from all five continents. All three categories are using LeCont tyres. Although the search for slipstream can lead to good times, it is not essential on the 1360 m Horensbergdam circuit known as the “Home of Champions”. Good management of the six-minute time limit per session was the key to achieving the fastest laps.

KZ2: Trefilov at the head of the Qualifying list

Two drivers, David Trefilov from Germany and Tom Leuillet from France, were significantly ahead of the others in Qualifying for the first round of the FIA Karting European Championship – KZ2. With his time of 50”812, Trefilov relegated his opponents by more than two tenths of a second after the four sessions. Leuillet did almost the same in the fourth session. Markus Kajak (EST) and Daniel Vasile (ITA) finished top of Sessions 1 and 3 respectively.  Dominik Reuters (DEU) finished in the top five ahead of Arvid Lindblad (GBR), one of the two drivers from the OK category. David Liwinski (POL) secured a good seventh position ahead of Kris Haanen (NLD), then Robert Kindervater (DEU) and Tim Tröger (DEU). 18 Qualifying Heats are on the KZ2 programme between now and Saturday evening.

David Trefilov commented on his performance:

“I had space in front of me so I wasn’t hindered by the traffic. I was able to concentrate on setting the fastest time. I was very fast during the last two laps which confirms the competitiveness of the equipment and the Maranello SRP team. I like this track where I have already achieved very good results. This pole position gives me confidence for the next phases and I am already thinking about the Final.“

The opening event of the 2022 FIA Karting Academy Trophy season confirmed the validity of the FIA’s intention to increase the number of participants. The 54 entered drivers were present in Genk at the wheel of the identical Exprit/Vortex/LeCont karts that were allocated to them by drawing lots. They had been able to familiarise themselves with their equipment since Thursday 12th May and they started their timed session with two hours of preliminary testing.

The first session had the smallest gaps among the best places. Belgian Thibaut Rasmaekers was the fastest with 54’248, but the top five were separated by just over 5 hundredths of a second. Aleksandar Bogunović (SVN) finished just 10 thousandths behind the leader, followed by Jindřich Pešl (CZE), Luca Houghton (BHR) and Caleb Gafrarar (USA) to make up the top five.

In the second session, Guillaume Bouzar from Luxembourg took pole position in 54”163, but William John Riley Go (PHL) followed him by 4 thousandths. Arthur Dorison (FRA) took third place 8 hundredths ahead of Joel Pohjola (FIN) and Dinu Sabin Stroescu (ROU), both more than 2 tenths behind. Chiara Bätig (CHE), a driver supported by the FIA Women in Motorsport Commission, finished seventh in her session and 15th overall.

“I didn’t follow the strategy of most drivers. I took it easy so I didn’t rush my tyres. Instead of wasting time looking for the maximum slipstream, I decided to start alone in front. I pushed to get the best time when the tyres were at their peak performance.”

Free Practice for the FIA Karting European Championship – KZ had confirmed the strong competitiveness of many drivers and the Qualifying session was expected to be close. However, one name stood out, that of Frenchman Emilien Denner, who managed to distance his rivals by 0.172” with his lap of 50”511. Francesco Celenta (ITA) secured a rewarding second place against Matteo Vigano (ITA), Tuukka Taponen (FIN) on his debut in the category and Simo Puhakka (FIN). With Paolo Ippolito (ITA) sixth, five drivers were grouped within 6 hundredths of a second.

“It was not easy to get a good position without losing time, but I managed to do it. I was already very fast on the fourth lap and I was able to improve on the following lap without making any mistakes. The last two laps showed that the potential was there. I knew I had the right package to aim for pole position, I just had to give it my all because the standard is always very high in KZ. I would like to thank the Sodikart team and the TM Racing engine manufacturer for their great efficiency.”

Provisional programme for the Genk event

The Genk event can be followed on the official FIA Karting Championship app for mobile devices and on the website www.fiakarting.com.