Home Culture Coleen Rooney says marriage was on the rocks when story was leaked... 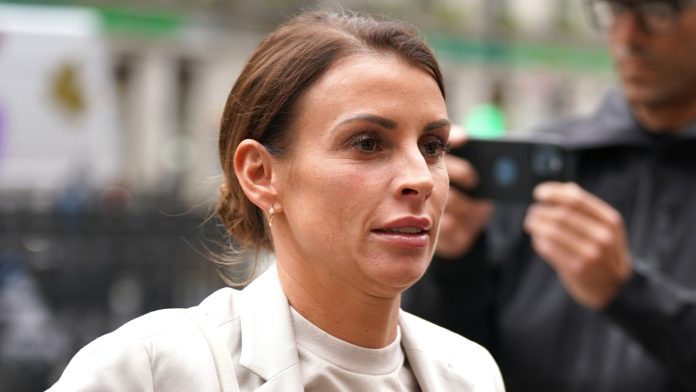 Coleen Rooney has admitted she “didn’t know how her marriage was going to work out” after her husband Wayne was arrested for drink-driving during her first testimony at her high-profile libel trial.

The WAG is facing off against Rebekah Vardy at the High Court after she accused her of leaking “false stories” about her private life to journalists.

She posted the pictures after the former England footballer was arrested for drink-driving in September 2017.

He was found to be almost three times over the limit and with a female passenger he picked up in a bar also in the car.

“I was in a vulnerable situation, I didn’t know how my marriage was going to work out,” she told the court.

The WAG and her children were staying at her parents’ house when she posted the pictures in October 2017.

Rooney said: “Me and Wayne was trying to figure out our relationship, and see how things were going.”

An article appeared in The Sun a month later saying Wayne Rooney had “been allowed back into the marital bed” after his wife forgave him.

Coleen Rooney said this was one example of private information leaked to The Sun.

She told the court: “That was information that I was happy to share in the private group… but I didn’t want the public to know that.”

Rooney complained about the leak at the time, putting a screenshot of the private post and saying: “The GRASS strikes again!!!”

She said she put the picture on her private account wondering if it would appear “that HORRIBLE newspaper”.

She added: “If you really needed the money that bad you could have always just asked instead of being SLY!!!”

She called this her “first warning shot” and said Vardy contacted her at the time to sympathise with her over the leak.

More key points from the day:

The incident with Abbey Clancy

She was also questioned about an Instagram post by Abbey Clancy, in which the model had mistakenly shared private information from Rooney.

Vardy’s lawyer Hugh Tomlinson QC said this showed things had been leaked before, though Rooney said this was a good example as Clancy had contacted her immediately and apologised.

She said Clancy hadn’t realised it was information on Rooney’s private account and had offered to take it down.

The High Court had earlier heard the final part of Vardy’s testimony, in which she discussed comments she made saying Peter Andre was “hung like a small chipolata”.

Vardy, who was 22 when she made the remarks in an interview, said she was very young at the time and described it as “shameful” and “one of my biggest regrets”.

When asked if she had spoken to Andre about it since, she said: “I haven’t spoken to him but I sent both his wife and him personal messages a couple of years ago.”

Tensions between Jamie Vardy and Wayne Rooney were ‘b*******’

Vardy’s lawyer also brought up a series of media stories suggesting there was tension between her footballer husband, Jamie Vardy, and Wayne Rooney due to Rebekah constantly seeking media attention.

The stories claimed Wayne Rooney had suggested to Jamie Vardy that he ask his wife to keep a lower profile.

Asked whether the conversation had taken place, Rebekah Vardy said her husband told her there was no discussion between the two men and he had called it a “load of b*******”.

She said she believed it was a made-up story put out by the media to “try to cause trouble and make unnecessary drama”.

Rebekah Vardy is suing Coleen Rooney for libel. The trial before Mrs Justice Steyn continues, with a decision expected in writing at a later date.

How to use Disk Utility on a Mac