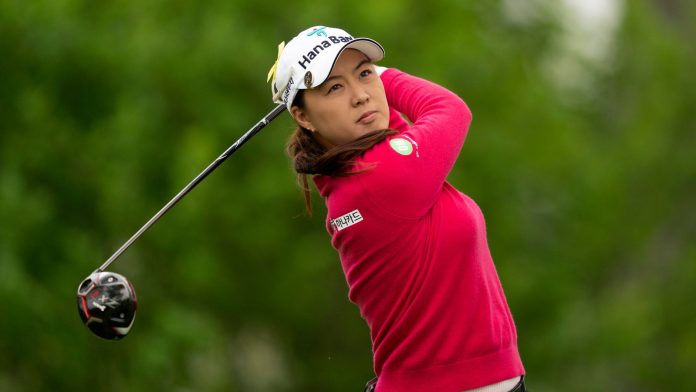 The Australian, who has six career wins, finished with a 36-hole total of 14-under 130; watch Cognizant Founders Cup this week, live on Sky Sports Golf; coverage continues on Saturday at 11pm

Minjee Lee finished with a nine-under-par 63 to take a three-shot lead halfway through the second round of the Cognizant Founders Cup.

Lee, who has six career wins, almost posted the best round of the year on the LPGA Tour. She was 10 under after a birdie at the 15th on the Upper Montclair Country Club.

However, the Australian bogeyed the 16th and parred in to finish with a 36-hole total of 14-under 130, one shot off the tournament record.

While she has not won this year, 25-year-old Lee has competed in six tournaments, posting two top 10s and nothing worse than a tie for 23rd.

She tied for second in the HSBC Women’s World Championship in March and shared third in the Los Angeles Open last month.

“Maybe this will be the first one and it’ll kick start the rest of the year,” Lee said.

Sanna Nuutinen, the 31-year-old Finnish veteran playing her first season on the LPGA Tour, had a 68 and was alone in fifth at nine under.

‘I want to be the next Johnny Nelson!’

For under $30, this collection can turn you into a Microsoft...

African Union and ICRC Marks 30 years of Partnership on Humanitarian...