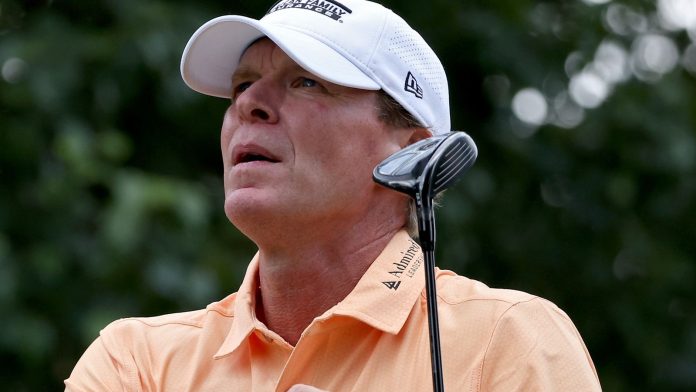 Stricker heads into the final round on 17 under and three clear of Steven Alker, with Miguel Angel Jimenez in third place; Defending champion Alex Cejka disqualified for using a yardage book not approved by the PGA Tour Champions Rules Committee

Ryder Cup-winning captain Steve Stricker will take a three-stroke lead over Steven Alker into the final round of the Regions Tradition, the opening senior major of the season.

The 55-year-old, playing in just his third event since a six-month hiatus for health reasons, carded a six-under 66 to extend his overnight advantage and bolster his hopes of a fourth senior major title.

Stricker posted back-to-back birdies from the third and added another at the par-four eighth to reach the turn in 33, before cancelling out a bogey at the tenth with three consecutive birdies from the 13th.

The American then added a two-putt birdie at the par-five last to move to 17 under at Greystone Golf and Country Club, increasing the cushion over closest challenger and Charles Schwab Cup points leader Steven Alker.

Alker, a two-time winner already this season on the over-50s circuit, birdied the final two holes to close a seven-under 65, while 2018 champion Miguel Angel Jimenez is five strokes back in third spot after a third-round 67.

“It [a maiden senior major title] would mean a lot,” Alker said. “I’ve won three times and the majors are a big deal out here. We’ve got five of them, so we’ve got a good shot at a few.”

A final-hole eagle helped salvage a two-under 70 for Padraig Harrington and move him to 11 under alongside Stuart Appleby, who sits tied-fourth after a bogey-free 68, while Ernie Els is seven strokes back with Glen Day.

Defending champion Alex Cejka thought he had posted a third-round 66, only to be disqualified for using a yardage book that had not been approved for the competition by the PGA Tour Champions Rules Committee.