Home Sport Lee stays ahead of Sagstrom in New Jersey 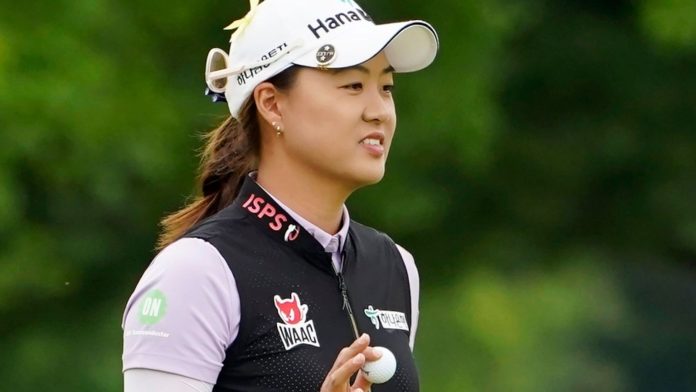 Lee heads into Sunday’s finale on 17 under and one ahead of Sagstrom, with Lexi Thompson three strokes back in third ; Watch the final round live on Sunday from 5pm on Sky Sports Golf and the Sky Sports Golf YouTube channel

Minjee Lee takes a one-shot lead over Madelene Sagstrom into the final round of the LPGA Tour’s Cognizant Founders Cup in New Jersey.

Lee followed a brilliant second-round 63 with a three-under 69 in wet conditions at Upper Montclair Country Club, mixing an eagle with three birdies and two bogeys to move to 17 under.

The Australian holds a narrow advantage over Sagstrom, who birdied three of her opening four holes on her way to a bogey-free 67, while Thompson remains within three of the lead after matching Lee’s 69.

“Coming into the week I knew I was hitting it well,” Thompson said. “Worked extremely hard in the week off, so I put in the work coming out here believing in myself and committing to my golf shots, really just staying in the moment. That’s what I’ve done all week, and I’ll come out and do the same tomorrow and see where that takes me.”

Angel Yin is six strokes back in fourth spot following a four-under 68, while Ally Ewing slipped out of contention and dropped to tied-fifth alongside Megan Khang and South Africa’s Paula Reto after a two-over 74.

World No 1 Jin Young Ko and AIG Women’s Open champion are on five under and tied-25th, while Scotland’s Gemma Dryburgh heads the British interest and is on three under after a one-under 71.